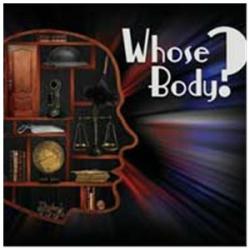 Dorothy L. Sayers was working as a copy writer for an advertising agency when she wrote her first mystery, “Whose Body?”, which was published in 1923.  She said about Wimsey, “at the time I was particularly hard up and it gave me pleasure to spend his fortune for him. When I was dissatisfied with my single unfurnished room I took a luxurious flat for him in Piccadilly. ... I can heartily recommend this inexpensive way of furnishing to all who are discontented with their incomes" 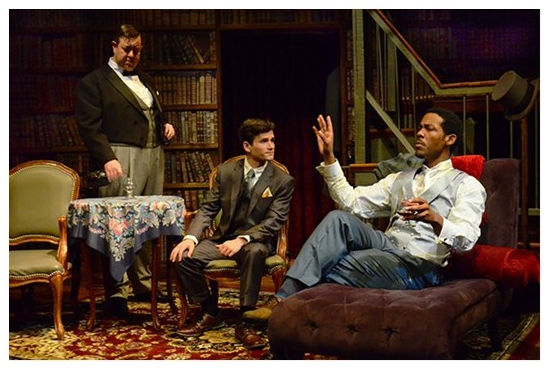 Lord Peter Wimsey (William Anthony Sebastian Rose II) is a British aristocrat (his brother is the Duke of Denver) and amateur detective who masks his sharp intelligence with an absent-minded, rather ditzy persona.  Bunter (Scott Danielson), his unflappable valet/butler, was his Sergeant during the War (WW I).

When Mr. Thipps (John Drea), an architect, finds a dead body of a man wearing only a pair of pince nez (eyeglasses without ear pieces) in his bathtub, he calls on Lord Peter.   Wimsey is delighted to hear about the find, promptly sending Bunter off to the rare book auction he’d intended to attend and departing to see the body.

His examination of the body is rudely interrupted by a policeman named Sugg (Joshua K. Harris) who throws Lord Peter out of ‘his’ crime scene.  Sugg suggests that the body may be that of Sir Reuben Levy, a wealthy financier who disappeared from his bedroom under mysterious circumstances.

Since Lord Peter observed that the body was that of a working man, he wondered whether it might be missing from a nearby hospital, perhaps put there as a some kind of a prank by medical students, but Dr. Julian Freke (Tony Bozzuto) denies that theory. 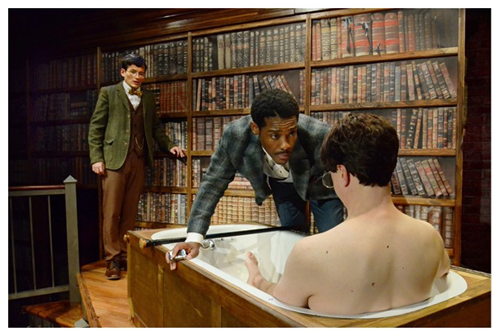 After his good friend, Inspector Parker (John Drea) drops in to discuss his latest case -  Sir Reuben’s disappearance – Lord Peter visits his mother, the Duchess of Denver (Katie McLean Hainsworth), for tea and her observations about Sir Reuben and Lady Levy (Michaela Voit).

In the middle of the case, however, Lord Peter experiences a flashback to the war which leads into extreme episode of shell shock (what we’d call PTSD today).  After Bunter calms him down, he’s taken to the country to recover.  When Inspector Parker comes to call, the Duchess warns him not to excite her son.   A tiny bit of information – that Sir Reuben had a chance encounter with a prostitute walking near the hospital – and Sir Julian’s home – brings Lord Peter back.  And he’s off to London to solve the case. 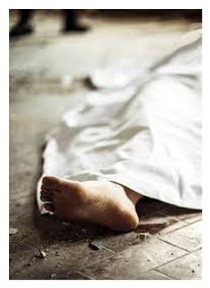 Lifeline’s stage is quite small, but Scenic & Props Designer Alan Donahue makes the most of the space.  Lord Peter’s book-lined study is situated on a small platform.  There are doors hidden under that platform which help set other locations, one set of doors hiding a bed which can be pulled out for one scene, another set hiding a desk.  In another scene, Lord Peter’s furniture is pushed against the wall and the carpeting pulled up revealing a trapdoor which opens to reveal a grave.

By the way, “Whose Body?” is not the first Lord Peter adaptation for Lifeline – they’ve also done “Gaudy Night” and “Busman ‘s Honeymoon”.  In addition, for their 2019-20 Concert Reading Series Lifeline will be doing The Dorothy L. Sayers Series (a light supper and concert reading - $50 for subscribers, $75 otherwise) including “Strong Poison” (November 6th), “Gaudy Night” (March 18th) and “Busman’s Honeymoon” (June 17th).

Lifeline Theatre really is one of my favorite places.  Have you ever sat shivering through a performance?  That will never happen at Lifeline because there’s a blanket on every seat!  They’re unique because every play they do – for adults and for children – is their own literary adaptation.  Over the years, I’ve seen adaptati 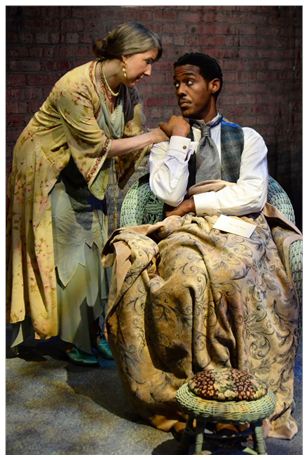 ons of many of my favorite books at Lifeline – and every time, the book has been on sale in the lobby!