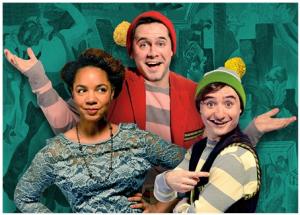 While the audience is getting settled, a Troupe Manager (Lillian Castillo) is trying to get. things organized – which seemed to be a lot like herding cats!  In addition to a couple of ladders and a banner, the cast brought in trunks, barrels, and rolled-up rugs – which are a terrific slapstick prop.  One of her actors ‘found’ a skull and thought they might be doing Hamlet (translation, he wanted to play Hamlet).  Finally, they were ready to go. 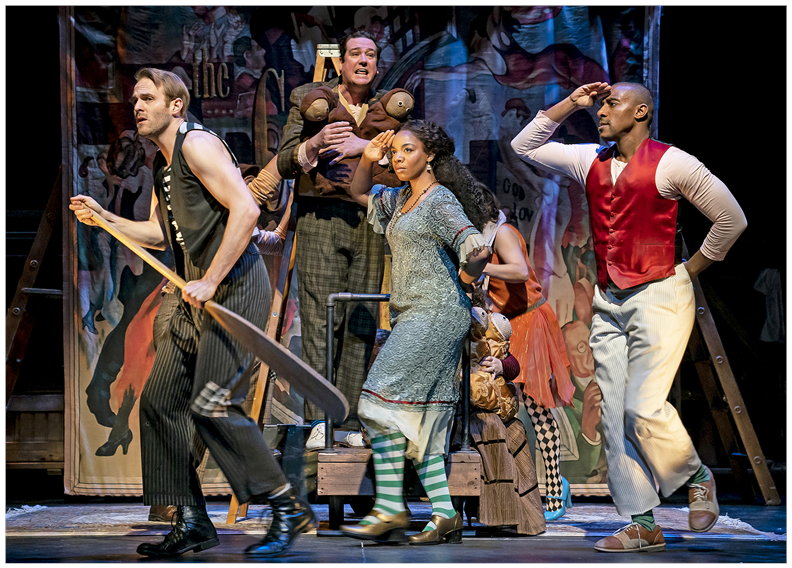 As an introduction to Shakespeare, “Comedy of Errors” is a perfect choice.  It’s full of slapstick comedy, mistaken identities, madcap chases and plenty of hijinks.  In this production, the cast used the entire theater (and the Yard is really large), running up and down the aisles and through the rows.

The stage didn’t have a lot of scenery, but the costumes made up for it.  They were all funky and fun, pairing clashing colors and plaids with stripes.  Even the few costumes that seemed ‘normal’ were paired with striped or harlequin stockings.  The two Dromios had similar outfits – one more or less red, the other green – consisting of a striped shirt under a vest, plaid pants with suspenders, bright colored shoes and a beanie hat with a pompom.  Kudos to Ana Kuzmanic for the costume designs. 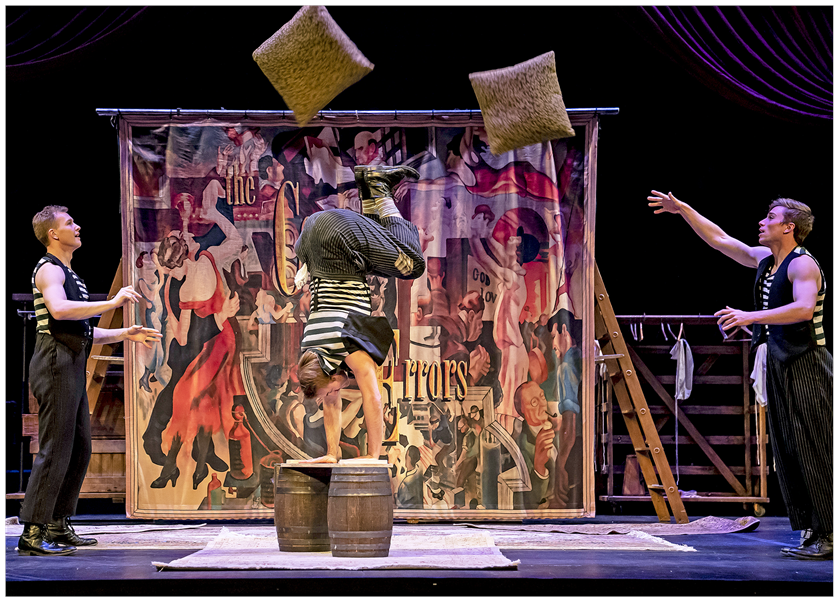 The Duke of Ephesus (Laurence Stepney) exacts a fee of 1,000 gold marks from anyone visiting his bailiwick.  Egeon, a merchant from Syracuse who can’t pay the fee, is condemned to death.  Egeon told a sad story about a shipwreck, two sets of twins and his long-lost wife, Emilia (Castillo).  Moved by Egeon’s sad tale, the Duke moved the execution back one day to give Egeon time to find someone who could/would pay his fee. 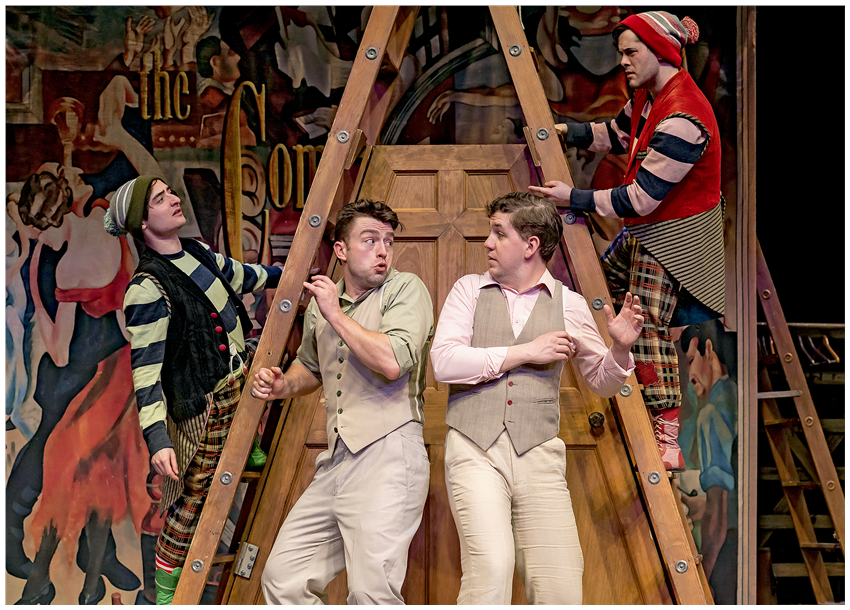 Arriving in Ephesus, Antipholus of Syracuse (Adam Wesley Brown) sent his bondman, Dromio of Syracuse (Ian Maryfield), ahead to an inn with his purse full of gold.  When, just moments later, Dromio of Ephesus (Sam Linda) who doesn’t have any gold, runs up to him saying he must go home for dinner, Antipholus beats him for losing the gold..

Meanwhile, Adriana (Nora Carroll), the volatile wife of Antipholus of Ephesus (Casey Hoekstra), and her sister, Luciana (Phoebe Golzalez), have dinner ready and awaiting the return of her husband.  Spotting her servant Dromio (who is actually Dromio of Syracuse), she beats him for not bringing his master home to dine.  Dromio of Ephesus apparently has a relationship going on with Luce (Drew Shirley), the kitchen maid, who pursues Dromio of Syracuse all over the theater.

Antipholus of Ephesus, out partying with his buddies, reminds Angelo (Nima Rakhshanifar), the gold 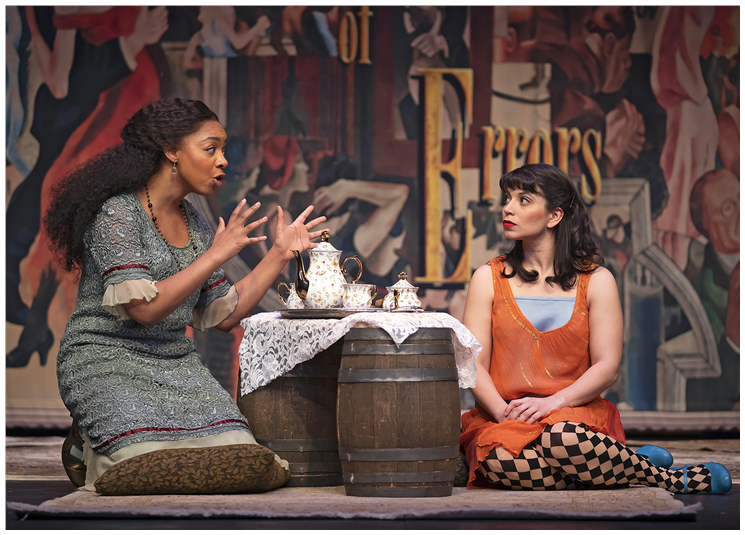 merchant, that he’ll pay for the gold chain he ordered when it’s delivered.  Soon thereafter, Angelo does deliver the chain – to the wrong Antipholus who tells the local Courtesan (Castillo) that the chain is for her.  Eventually, the twins are in the same place at the same time and everything becomes clear.

Each year, Chicago Shakespeare Theatre brings thousands of students into the Courtyard Theatre for their Short Shakespeare! productions.  In years past, I’ve seen abridged versions of “Romeo and Juliet”, “The Taming of the Shrew” and a magical “A Midsummer’s Night Dream”, to mention a few.

Instead of using the standard cellphone/texting/photography recorded announcement, a costumed cast member came onstage to give the audience tips about understanding Shakespeare’s language and how the actors’ body language helps in listening and understanding.  After the show, the actors stayed on stage to answer questions from the audience, followed by conversations and photo ops in the lobby. 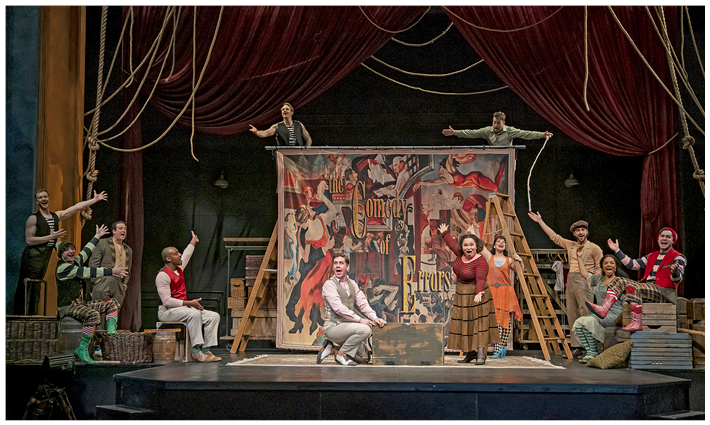 “Short Shakespeare! Comedy of Errors” runs through February 29th in the Yard at Chicago Shakespeare Theatre on Navy Pier, Chicago.  Patrons receive a 40% discount on parking in the Navy Pier Garages, so be sure and get your ticket validated in the CST lobby.

Running time is 75 minutes, followed by a Q & A with the entire cast.  Public performances are on Saturdays at 11:00 am.  Accessible performances: