How well do you know the official state song of Indiana?  Fill in the blanks.

1867     Wilbur Wright was born near Millville in Henry County.  His father, Milton Wright, was a bishop in the Church of the United Brethren in Christ.  The family moved several times, ending up in Dayton, Ohio, where Wilbur and his brother Orville conducted experiments which made aviation history.

1903     Indiana Governor Winfield T. Durbin and United States Senator Charles W. Fairbanks led the grand opening of the West Baden Springs Hotel in French Lick.  Called the "Eighth Wonder of the World," the circular structure encompassed the largest unsupported dome in the world.  Palm trees grew in the atrium.  With over 500 rooms, the venue offered a gambling casino, movies, bowling, and billiards.  A primary attraction were the mineral baths which many believed could cure a variety of ailments.

Visitors to  French Lick often ask about the origin of the town's name.  The answer is simple:  the town is named for the township it's in.  Next question:  Where did the township get its name?  According to legend, in the early years of the 19th century, salt deposits in the area attracted French settlers from Vincennes.  The salty water, commonly called a "lick," proved inviting to deer and other animals, therefore making the region a good source of game.  The region also became famous for its sulfur springs, which many believed had almost magical curative powers.  Pluto water,  a best-selling laxative in the early 20th century, was bottled in French Lick.   In 1931, the National Governors' Convention was held at the Luxurious French Lick Springs Hotel, and it was there that Franklin D. Roosevelt started laying his plans to run for President.  Perhaps the most famous person from French Lick today is basketball star and coach Larry Bird.

1921     Indianapolis Mayor Charles W. Jewett said, "There is no place in this city for a Ku Klux Klan organization or any other organization designed to create antagonism between citizens.  He was responding to newspaper reports that the Klan was organizing in the area.  "All have the right to enjoy the peaceful pursuits of happiness," he said, "and have the full protection of the government in this enjoyment."

1945     Flags at the Indiana Statehouse were lowered to half-staff following news of the death of President Franklin D. Roosevelt.  Governor Ralph F. Gates sent a telegram to First Lady Eleanor Roosevelt extending the sympathy of the people of Indiana.  He pledged loyal support of all Hoosiers for the new President, Harry S. Truman. 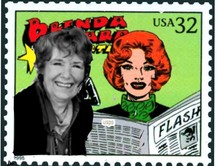 1964     Dale Messick was the featured speaker at the annual meeting of the Women's Press Club in Indianapolis.  Born in South Bend, she was America's first syndicated female cartoonist.  Her "Brenda Starr, Reporter" comic strip appeared daily in 250 newspapers.  Millions of readers followed the adventures of the glamorous newspaper reporter who chased stories around the world.  Pictured:  Dale Messick in front of the Brenda Starr stamp which was issued in 1995 as part of the Post Office's  "Comic Strips Classics" issue.

"I used to get letters from girl reporters saying that their lives were nowhere near as exciting as Brenda's.  I told them that if I made Brenda's life like theirs, nobody would read it."    - - - Dale Messick (1906-2005)

1971     Plans were announced for the construction of a multi-use stadium in downtown Indianapolis near the City Market.  Mayor Richard G. Lugar said, "Stimulated by the progress we announce today, let us dream of those things which now seem a great deal more possible tomorrow."  Three years later, opening ceremonies were held for Market Square Arena.  Pictured:  A preliminary sketch of the arena.

Th' trouble with banquets is that they set you so close t'gether it knocks the peas off your knife.