Following are fictional Indiana cities which serve as "home towns"  for television shows.  Match the town to the show.

1836     Indiana passed the Internal Improvement Act.  Signed by Governor Noah Noble, the law proposed the building of interconnected canals, turnpikes, and railroads throughout the state.   Bonds were issued to citizens and speculators for funding a long list of projects.  It was hoped the work would be done in ten years and be fully covered by the budget.

The Indiana Internal Improvements Act of 1836 seemed like a good idea at the time.  The state, only 20 years into statehood, was heavily forested.  Travel was difficult if not impossible in some sections.  The act called for the construction of canals, turnpikes, and railroads throughout the state.  All would be interconnected.  Soon, every town and hamlet wanted to be part of the plan.  The price tag ballooned to over $10,000,000. Before any of the projects could be completed, the Panic of 1837 sunk the economy across the nation and forced the state into bankruptcy.  This financial disaster had a large impact upon the decision to write a new state constitution in 1851.  This document put strict limits on state expenditure and debt.

1899     A cheering crowd at the Indiana Statehouse greeted officers and crew of the Battleship Indiana.  They had come to present the state with a Nordenfeldt machine gun captured from the Spanish Cruiser Maria Teresa during the recent Spanish-American War.  They also provided the battle flag carried by the Indiana in the naval engagement off Santiago de Cuba.  Governor James A. Mount and members of the General Assembly participated in the ceremony.  Rev. M. L. Haines offered prayer and James Whitcomb Riley recited his poem "Old Glory."

1901     Just two days after leaving office, former Indiana Governor James A. Mount died of a heart attack at the Denison Hotel in Indianapolis.  A farmer from Montgomery County, he had fought in the Civil War and served in the state senate.  His body lay in state at the Indiana Statehouse before burial at Oak Hill Cemetery in Crawfordsville.  (Pictured:  A detail from the official portrait of Governor Mount by Hoosier artist James M. Dennis.)

1920     Governor James P. Goodrich called a special session of the Indiana Legislature to ratify the Women's Suffrage Amendment of the United States Constitution.  Indiana was the 26th state to approve the amendment, which went into effect nationwide on August 18, 1920.  In signing the bill, Governor Goodrich called it "an act of tardy justice." 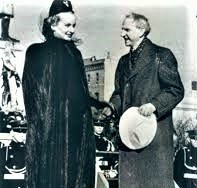 1942     Actress Carole Lombard led a war bond rally in Indianapolis.  The popular movie star, born in Fort Wayne, joined Governor Henry Schricker in ceremonies on the east steps of the Statehouse.  She died that night on the way back to her home in California when her private plane crashed into the side of a mountain.

1977     Mooresville Police Chief Harold Martin officially changed his name to Harold "Kojak" Martin after picking up the name in tribute from the town's youngsters.  A former career soldier, Martin received a letter from Telly Savalas, the actor who played the television detective.  "I want to congratulate you on your new name," he wrote.  "It is an honor not only to me but to all of us with Kojak Productions.  Keep up the good work and the best of luck always."

STATEHOOD DAY: Learn about the three branches of government and more!