1877     Robert Dale Owen died in New York State.  Born in Scotland, he came to Indiana with his family when his father established the New Harmony community in Posey County.  He served in the Indiana House of Representatives and was a member of the state constitutional convention in 1850.  He also represented Indiana in Congress.  He is known for his strong stand on free public schools and women's rights to vote and own property.   (Pictured:  A monument to Owen on the south lawn of the Indiana Statehouse.)

While in Congress, Robert Dale Owen introduced the bill that established the Smithsonian Institution.  He was appointed to the Institution's first Board of Regents in 1846.  As chairman of the building committee, he worked with his brother, geologist David Dale Owen.  Their plans played a large role in the choice of Romanesque Revival architecture for the new structure.  It was not without controversy at the time, but the "castle" which they proposed has become a unique and treasured part of the landscape in Washington.

1882     William M. Scholl was born on a farm near La Porte.  While working in shoe repair, he developed an interest in podiatry.  After attending medical school, he began to manufacture arch supports.  His company expanded, and today Dr. Scholl's is one of the largest makers of foot care products.

1904     Phil Harris was born in Linton, Indiana.  He became famous as an orchestra leader, singer, comedian, and actor in movies, radio, and television.  His voice became known to millions through his work in animated Disney movies like The Jungle Book, The Aristocats, and Robin Hood.

1921     The Sellers Company of Elwood, Indiana, introduced a new "apartment sized" line of kitchen cabinets.  Designed to fit under windows and in small kitchens, the new models retained the useful features of the larger Sellers cabinets:  Work counter, storage area, shelf space, and flour bin and sifter.  Prices ranged from $34.75 to $75.00

1934     Over 20,000 people lined the streets of Muncie for a parade of the GAR (Grand Army of the Republic.)  There were 125 Civil War soldiers in the procession, which included Governor Paul V. McNutt and the band from the Soldiers' and Sailors' Children's Home in Knightstown.  All during the parade, three airplanes flew overhead, dropping small parachutes which were attached to American flags.  (Pictured:  A GAR medal.) 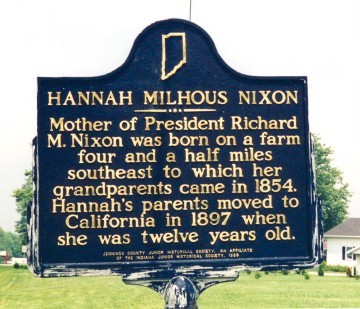 1971     President Richard M. Nixon visited Jennings County to help dedicate an Indiana Historical Marker at the birthplace near Butlerville of his mother, Hannah Milhous Nixon.  "My mother left Indiana at the age of 12," the President said, "but I can tell you Indiana never left her."

A good listener is usually thinkin' about somethin' else.  (Kin Hubbard, The Indianapolis News, June 11, 1924)