All of the songs below, except one, were composed by Hoagy Carmichael.  Which one did not come from his talented pen?

1839     Indiana Governor David Wallace proclaimed Thursday, November 28, 1839, to be an official Thanksgiving Day for the state.  In his proclamation, the Governor asked citizens to show gratitude for their good harvest and health.  100 years later, some Indiana communities celebrated two Thanksgivings.

It was 1939.  Thanksgiving, always the last Thursday of November, came on the 30th that year.  Business owners, aware that most people waited until after Thanksgiving to start shopping for Christmas, were concerned about the late start to their best season of the year.  They persuaded President Franklin D. Roosevelt to declare the holiday a week early, on the 23rd.  He might have been surprised at the uproar which followed.  Calendar makers were obviously upset.  So were school officials, factory managers, churches, and all others who had made plans for the holiday on the 30th.  The result was that many communities stuck with the original date.  Some went with both, including the Indiana cities of Washington, New Albany, and Delphi, where city workers got the day off on both dates.  History will record that 1939 was the year with two Thanksgivings.  One newspaper reported that, regardless of what was on the menu, everyone was in a stew.  By the way, in 1941 the holiday was changed to the fourth Thursday in November, thereby guaranteeing that Thanksgiving would never come any later than November 28. 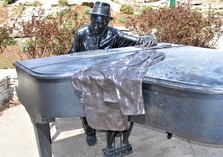 1899     Howard Hoagland "Hoagy" Carmichael was born in Bloomington.  He earned a law degree from Indiana University, but his interest in music led him to a legendary career as composer, singer, and actor.  He starred on the stage, radio, movies, and television.  Pictured:  A bronze sculpture of Hoagy at his piano on the campus of Indiana University.  It was created by Hoosier sculptor Michael McAuley.

1903     George Ade's County Chairman opened at Wallack's Theater in New York.  One of the most popular playwrights of his era, Ade at one time had three plays running simultaneously on Broadway.  Born in Kentland, Indiana, he was always loyal to his alma mater, Purdue, and helped build the university's football stadium.

1920     Gaston Chevrolet, the winner of the most recent Indianapolis 500, was killed during a race at the Los Angeles Speedway.  He and his brothers, Louis and Arthur, lived in Indianapolis where they operated a car dealership and repair garage.  Louis was one of the founders of the car company which bears the family name.  All three brothers are buried at the Holy Cross and St. Joseph Cemetery on the south side of Indianapolis.

1942     Indiana placed 5th out of the 48 states in the national scrap metal drive.  Over 6-million tons of iron and steel were collected across the country.  Indiana's contribution amounted to over 213,000 tons or 125 pounds per person.  The material would be used to make tanks, ships, planes, and guns as the United States was rapidly ramping up its military after entry into World War II. 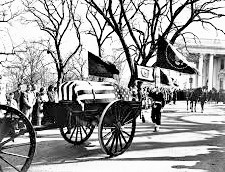 1963     Governor Matthew E. Welsh proclaimed a 30-day mourning period for Indiana following the assassination of President John F. Kennedy.  The Governor and his wife Mary attended the President's funeral in Washington on November 25.  The same day, Lieutenant Governor Richard Ristine placed a wreath on the steps of the Indiana World War Memorial while 3,500 military personnel stood at attention.

A popular actress during the Golden Age of Hollywood, Irene Dunne graduated from Madison High School and attended the Indianapolis Conservatory of Music.

Answer:  Hoagy did not write "Back Home Again in Indiana."  That classic came from another Hoosier songwriter, James F. Hanley, and lyricist Ballard McDonald.