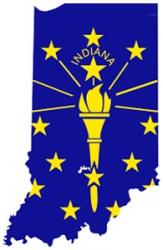 Indiana's "Golden Age of Literature" was a period from around 1880 to 1920.  Here are four prominent authors of that era.  Match each author to the correct title below.

Once Upon a Time in Indiana, edited by Charity Dye

1849     Charity Dye was born in Kentucky.  She moved with her family to Indianapolis where she graduated from the Normal School and became an English teacher at Shortridge High School.  She authored books about state history and promoted peace and women's suffrage.  In 1916, she served on the state's Centennial Commission.

1853     The second Indiana State Fair was held in Lafayette.  The first fair had been the year before in Indianapolis.  For the next few years, the event would be held in different cities, including Madison, New Albany, Fort Wayne, and Terre Haute  The special guest speaker at the Lafayette fair was New York newspaper editor Horace Greeley.

1927     A trailer carrying the Sahara Grotto Drill Team was struck by an interurban car near 23rd and Emerson in Indianapolis.  It was the worst interurban accident in city history, with 14 people killed and 6 injured.  The trailer was being towed to a dance barn near Pendleton.

1931     The ferry boat between Madison, Indiana, and Milton, Kentucky, tied up at the dock for the last time.  The Margaret J was the last of her kind to carry passengers back and forth across the Ohio River.  The opening of a steel bridge in 1929 spelled the beginning of the end for the ferry system, which had operated for over 125 years.

1933     United States Secretary of Labor Frances Perkins visited Indianapolis.  The first woman ever to serve on the Presidential Cabinet, she attended a downtown conference on labor.  Later she was a dinner guest of Governor Paul V. McNutt at the Governor's Mansion.  That evening she addressed a crowd at the Murat Theater on the topic "The New Challenge to Industry."

1962     A crowd of over 18,000 greeted President John F. Kennedy as Air Force One landed at Weir Cook Airport in Indianapolis.  It was JFK's first visit to the city since his election, and he was welcomed by Governor Matthew Welsh, United States Senator Vance Hartke, and Senate Candidate Birch Bayh.  The Indianapolis Star reported that "the President looked tan and healthy" and that he wore a "Navy blue suit with a blue tie pin-pointed with small white dots."

HOOSIER  QUOTE OF THE WEEK

"No government can long endure that fails to guarantee to its people the right to live as human beings."  - - Paul V. McNutt

The 2020 Census is Coming Soon
The federal government relied on Census data to provide over $17.9 billion in funding to Indiana for fiscal year 2016 from the 55 largest federal spending programs.  Although each program's funding formula is complex (and in most cases unique), Indiana's 17.9 billion in funding roughly equates to $2,710 per person each year.

NOTE:  The Statehouse will be closed on Monday, October 14, in observance of Columbus Day.