1822     Hordes of gray squirrels invaded Indiana.  Thousands of them swarmed from east to west, destroying entire cornfields.  Historians theorize that the woodlands that year failed to produce enough nuts to supply adequate food for the hungry creatures.  Although some farmers patrolled their fields with rifles, much of the crop was destroyed within hours.

1886     Natural gas was discovered in a well near Eaton, Indiana.  From a depth of 992 feet, a huge flame shot into the night sky, visible in Muncie, ten miles away.  Further exploration found the largest known gas field in the world, encompassing 17 Indiana counties.  The discovery ignited the historic Indiana "gas boom" which would have a profound effect on the state's economy.

The "Gas Boom" in Indiana lasted only about 15 years at the end of the 19th century, yet it had a huge effect on the state's economy.  Because of the cheap and seemingly endless supply of natural gas, hundreds of factories were established all over Central Indiana.  Frank C. Ball and his four brothers decided to move their fruit jar company from Buffalo, New York, to Muncie.  Other companies followed, and soon Muncie was the second-largest producer of glass in the country, second only to Pittsburgh.  The Hoosier "Gas Belt" included other cities like Anderson, Kokomo, and Marion.  Greentown, in Howard County, became famous for beautiful art glass, highly prized today by collectors.  In 1901, something happened which few expected:  the gas ran out.  Most of the glass producers closed down, but they left a manufacturing base ready and waiting for entrepreneurs in other fields.  The foundation of industry and labor were in place when automobile builders turned their attention to the Hoosier State in the early years of the 20th Century.

1901     Indiana Governor Winfield Durbin attended the funeral of President William McKinley in Canton, Ohio.  The President had been assassinated while attending the Pan-American Exposition in Buffalo, New York.  McKinley had been in Indianapolis six months earlier to attend the funeral of his friend, former President Benjamin Harrison.

1932     Over 10,000 people witnessed the unveiling of a statue of Abraham Lincoln in Fort Wayne.  "The Hoosier Youth," a 12-foot bronze sculpture by artist Paul Manship, depicts the young Lincoln seated on a tree stump holding a book.  An ax and a dog are at his side.  Lincoln had grown up in Southern Indiana, living there from age 7 to 21.

1970     Actor Fess Parker, well-known on TV as Daniel Boone, toured Indiana helping to light the torch for the United Way campaign.  He attended ceremonies in Indianapolis, Martinsville, Danville, Lebanon, Noblesville, and Greenfield.  He was accompanied on the trip by former Governor Harold W. Handley.  In Indianapolis, he was joined by Mayor Richard G. Lugar. 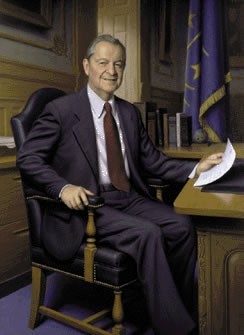 2003     A memorial service was held at the Indiana Statehouse for Governor Frank O'Bannon, who had died five days earlier as the result of a stroke.  O'Bannon, the state's 47th Governor, was praised by all as a kind and thoughtful friend.  United States Senator and former Governor Evan Bayh, with whom O'Bannon had served as Lieutenant Governor, described him as "a good man, a decent man, a statesman."  Among those paying their respects were four former Indiana governors, a dozen Congressmen, nine governors or former governors from other states, and many members of the state General Assembly.  Hundreds of school children were there, invited by First Lady Judy O'Bannon. Pictured:  The official portrait of Indiana Governor Frank O'Bannon by Indiana artist Michael Allan Chelich.

Hoosier  Quote of the Week

"Before you can think outside of the box, you have to start with a box." - - -Twyla Tharp  (Born in Portland, Indiana, she is a dancer, choreographer, and author who now lives and works in New York City.)