Back for its fifth year, kids of all ages are encouraged to dress in their holiday finest, or just come as they are, to this incredibly charming, meticulously designed puppet show starring Peter Rabbit and his favorite animal friends.

Chicago Children’s Theatre’s Beatrix Potter Holiday Tea Party has become a popular way for Chicago families to kick off their holiday season. Just ask the Chicago Reader who called it “dazzling, brisk at under an hour, and sweet as can be.”﻿

This year, The Beatrix Potter Holiday Tea Party boasts four enchanting stories – The Tale of Peter Rabbit, The Tale of Jeremy Fisher, The Tailor of Gloucester and The Tale of Mrs. Tittlemouse.

﻿But The Beatrix Potter Holiday Tea Party is much more then a sit-and-watch show. After the stories, the audience is invited on stage to pull levers and turn cranks that reveal magical 3D images of surprise and delight.

After photos with the cast, families meander to a Victorian-style dining hall, adorned with beautiful holiday decor and communal tables pre-set with cookies, warm cocoa and coloring activities.

The Beatrix Potter Holiday Tea Party is presented as a limited engagement, weekends only, December 7-29, at Chicago Children’s Theatre, The Station, 100 S. Racine Ave. in Chicago’s West Loop. Show times are Saturday and Sunday at 11:30 a.m. and 2 p.m. Press are invited to attend either show on Saturday, December 7.

Don’t wait, reserve now as performances do sell out. Single tickets are $45-$55 including fees. Even better, give your family the gift of live theater by including The Beatrix Potter Holiday Tea Party in a 2019-20 Chicago Children’s Theatre subscription package. For tickets, subscriptions and discounted rates for groups of 8 or more, visit chicagochildrenstheatre.org or call Chicago Children’s Theatre Guest Services, (312) 374-8835.

Chicago Children’s Theatre is a “no shushing” theater. The company’s home, The Station, is centrally located in Chicago’s West Loop neighborhood, minutes from I-90 and I-290, as well as downtown and Ashland Avenue. Chicago Children’s Theatre offers free onsite parking at The Station on the south side of the building, enter from Racine Ave. Nearby street parking is available on weekends, or try the Impark parking lot, 1301 W. Madison St. 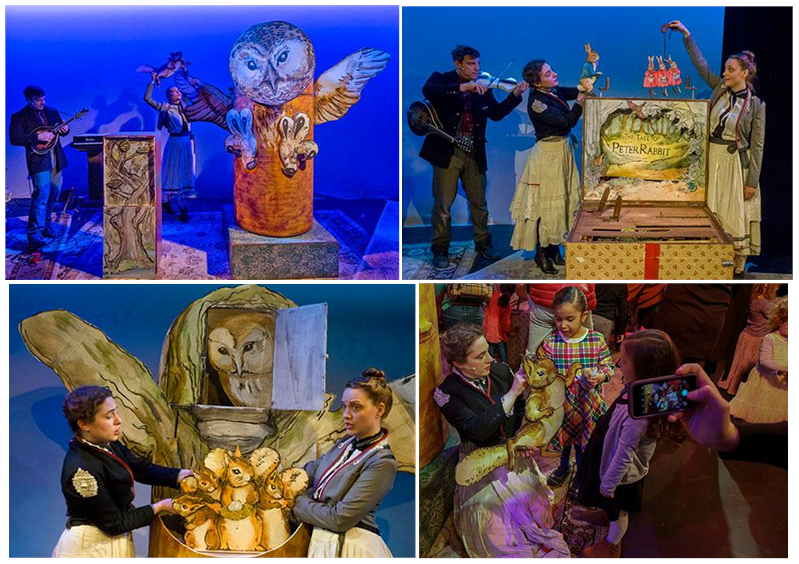 Click here for these and many more photos of The Beatrix Potter Holiday Tea Party.

CCT continues to grow its commitment to all Chicago children at The Station by expanding services for patrons with disabilities. Access Weekend is December 14 and 15. Services include:

﻿Behind the Scenes of The Beatrix Potter Holiday Tea Party

Prinicipal performers are Lara Carling, Kay Kron, with Ray Rehberg on violin and other instruments.

This current production is fresh off a sold-out summer tour to the 9th Annual China Children's Theatre Festival in Beijing and Jinan.

Beatrix Potter (1866-1943) was a British writer, illustrator and conservationist best remembered for her best-selling children’s books that combined her love for animals and the English countryside. During her childhood in England’s Lake District, she looked after many animals including rabbits, frogs and even bats. She drew these animals throughout her youth, gradually improving the standard of her drawings. In her 20s she sought to try and get her children’s book and drawings published. Her initial attempts proved unsuccessful, but she persevered and eventually her first book The Tale of Peter Rabbit, was published in 1902, when she was 36. Today, Peter Rabbit is one of the most beloved children’s books of all time. In sum, Potter wrote 24 books. Some of her best know titles include The Tale of Mrs. Tiggy-Winkle, The Tale of the Pie and the Patty-Pan and The Tale of Mr. Jeremy Fisher.

Chicago Children’s Theatre 2019-20 Subscription Packages are on sale now, starting at just $80 for three shows. Subscribers save up to 30% on single tickets and fees and received many other perks including 15 percent off all camps, and 10 percent off classes and birthday party rental fees. Visit chicagochildrenstheatre.org or call Chicago Children’s Theatre Guest Services, (312) 374-8835, to subscribe.

Led by Founding Artistic Director, Jacqueline Russell, Chicago Children’s Theatre was founded in 2005 with a big idea: Chicago is the greatest theater city in the world, and it deserves a great children’s theater.

Fourteen years later, CCT is Chicago’s largest professional theater company devoted exclusively to children and young families. It has established a national reputation for the production of first-rate children’s theater, with professional writing, performing, and directorial talent and high-quality design and production expertise.

Chicago Children’s Theatre remains dedicated to creating awe-inspiring theatrical productions and programs through inclusion and accessibility, and inspiring young people and families to lead lives of adventure, courage and curiosity. Since its founding, Chicago Children’s Theatre has produced 20 world premieres including The Selfish Giant, The Hundred Dresses, Jackie and Me, The Houdini Box, Mr. Chickee’s Funny Money, Leo Lionni’s Frederick, Wonderland, Alice’s Rock & Roll Adventure, Jabari Dreams of Freedom, The Year I Didn’t Go To School: A Homemade Circus, Manual Cinema’s Magic City, My Wonderful Birthday Suit!, Last Stop on Market Street, X Marks the Spot, The World Inside Me (with New York’s Spellbound Theatre) and The Watsons Go To Birmingham - 1963. These productions enjoyed successful inaugural runs in Chicago, many followed by productions at theaters across the U.S.

Earlier this year, Chicago Children’s Theatre won the 2019 National TYA Artistic Innovation Award from Theatre of Young Audiences/USA, the national service organization supporting, connecting and advocating for the field of theater for young audiences. In addition, Chicago Children’s Theatre has garnered six NEA Art Works grants, and in 2017, became the first theater for young audiences in the U.S. to win a National Theatre Award from the American Theatre Wing, creators of the Tony Awards.

In addition to leading the company’s new play development, mainstage and education programs, Jacqueline Russell is the creator of Chicago Children’s Theatre’s Red Kite Project, a multi-sensory interactive theatre program tailored specifically to children with special needs. Last season, Russell created and directed X Marks the Spot, a multi-sensory experience inspired by her work with children with visual impairments, which will tour Chicago area schools this fall. In 2010, she was appointed by the U.S. State Department to serve as Cultural Envoy to Canada, was awarded the 2013 “Hero of the Year Award” from the Chicago chapter of Autism Speaks, and was honored as one of 20 Chicago women who have shaped arts and culture featured on Kerry James Marshall's mural “Rushmore” on the west façade of the Chicago Culture Center.