Chicago Shakespeare Theater announces today a line-up of exciting programs for the month of December, making the Theater a virtual holiday destination for entertaining delights and enchanting discoveries. Audiences of all ages are invited to return to Neverland with a FREE on-demand streaming performance of Peter Pan – A Musical Adventure. The newly re-mastered recording of the Theater’s 2018 production—directed and choreographed by Amber Mak—was filmed by multiple cameras in front of a live audience, and now gives at-home viewers a front-row seat to the show. The 80-minute performance event will be available for worldwide distribution December 19 through New Year’s Day at chicagoshakes.com. 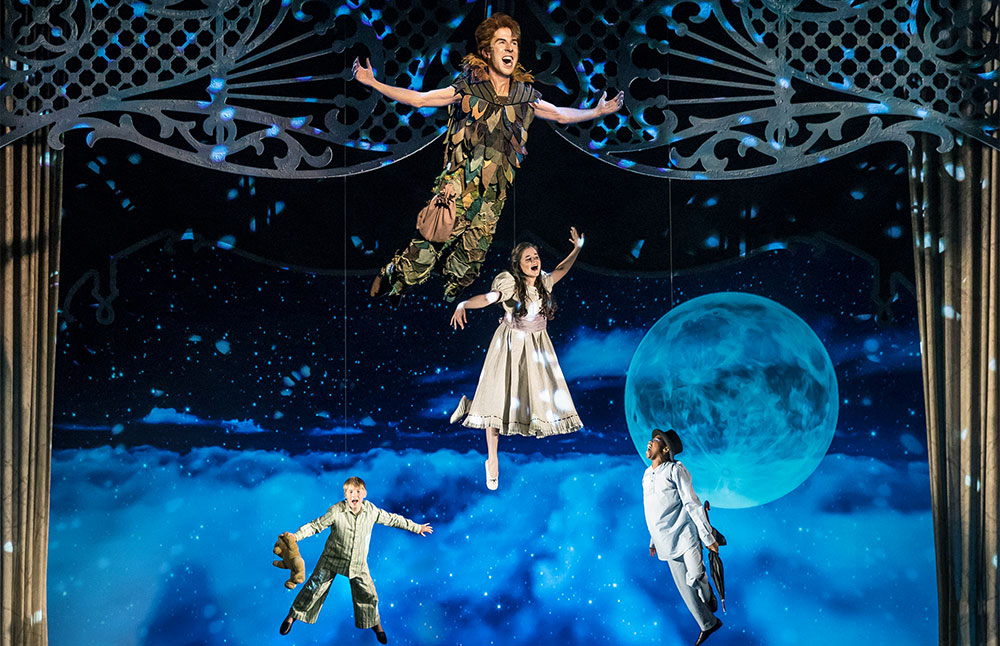 From December 3-6, 2020, the Theater will host its first-ever virtual Holiday Artisan Market in support of local theatermakers and community artists. Twenty-five Chicago-area artisans will showcase more than 200 one-of-a-kind, homemade wares in an online pop-up shop—perfect for holiday gift-giving. One hundred percent of proceeds will directly benefit the artisans, all impacted by the extended industry-wide shutdown due to COVID-19.

Based on J.M. Barrie's beloved tale about the boy who wouldn’t grow up, Peter Pan – A Musical Adventure dazzles with a score written by George Stiles and lyrics by Anthony Drewe—the award-winning songwriting duo behind smash hit Mary Poppins and the Olivier Award-winning Honk!. This newly updated version by Elliot Davis is based on the book by Willis Hall. The heartwarming musical follows Peter and the Darling children—Wendy, John, and Michael—on a high-flying journey to the enchanted world of Neverland, where the Lost Boys take on the villainous Captain Hook and his bumbling band of pirates. The 80-minute streamed production is the perfect opportunity for families to come together and experience the delights of theatrical performance this holiday season.

"What’s remarkable about young audiences is how they can transform the mundane and everyday into the fantastical," Director Amber Mak shared. "Yet in our world, as we tell them they have to grow up, that spark of imagination can be extinguished. Peter Pan has endured for so long because it inspires that imagination, hope, and freedom. Now more than ever, young people—and all of us, in fact—need that."

As part of the Theater’s commitment to making its programming accessible to all through its Access Shakespeare of initiatives, the streamed run of Peter Pan – A Musical Adventure will include options for closed captioning (a text display of the words and sounds heard during the performance), ASL duo-interpretation (all dialogue and lyrics are translated on-screen into American Sign Language by two certified interpreters), and audio description (a program that enables patrons who are blind or have low vision to more fully experience the performance through additional spoken narration of a play’s key visual elements).

Chicago Shakespeare’s first-ever Holiday Artisan Market will feature more than 200 one-of-a-kind goods from twenty-five local artists. All of the participating artisans are members of the creative sector—including onstage performers, backstage technicians, designers, and community artist partners from the Theater’s annual Chicago Shakespeare in the Parks program—who have been impacted by the COVID-19 industry shutdown. From jewelry and ceramics to knitwork and more, the Holiday Artisan Market will not only be a one-stop-shop for bespoke and beautifully made gifts, but also celebration of the talent and resilience of our city’s creative community. The pop-up shop will be live December 3–6, 2020 at chicagoshakes.com/market, with one hundred percent of proceeds going directly to the artisans.

Featured artisans include: three-time Chicago Shakespeare in the Parks Green Show performer Noelle Klyce and items from her crochet line Hook Me Up, Design Co; artists from the Fulton Street Collective, a community for both visual and performing artists in West Town, who will be offering acrylic paintings, pencil sketches, and ceramic pieces; Karen Avery, a potter and pottery instructor at Lillstreet Art Center, showcasing a range of functional pottery; and more.

A full list of the Holiday Artisan Market makers and their signature items will be announced in the coming weeks.

ABOUT CHICAGO SHAKESPEARE THEATER
Under the leadership of Artistic Director Barbara Gaines and Executive Director Criss Henderson, Chicago Shakespeare has redefined what a great American Shakespeare theater can be—a company that defies theatrical category. A leading international theater company and recipient of the Tony Award for Outstanding Regional Theatre, Chicago Shakespeare Theater’s year-round season offers a vibrant array of classics, musicals, new works, and family programs for 225,000 audience members annually. Chicago Shakespeare is the city’s leading presenter of international work, and has toured its own productions across five continents. The Theater’s nationally acclaimed arts in literacy programs support the work of teachers, and bring Shakespeare to life on stage for tens of thousands of students annually. Each summer, the company tours a free professional production to neighborhood parks across Chicago. In 2017 the Theater unveiled The Yard, which, together with the Jentes Family Courtyard Theater and the Thoma Theater Upstairs, positions Chicago Shakespeare as Chicago’s most versatile performing arts center. chicagoshakes.com