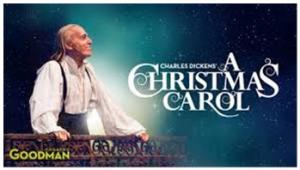 In the opening soliloquy, the Narrator, Kareem Bandealy, is absolutely positive that Marley is dead, dead as a doornail.  After he spends some time wondering 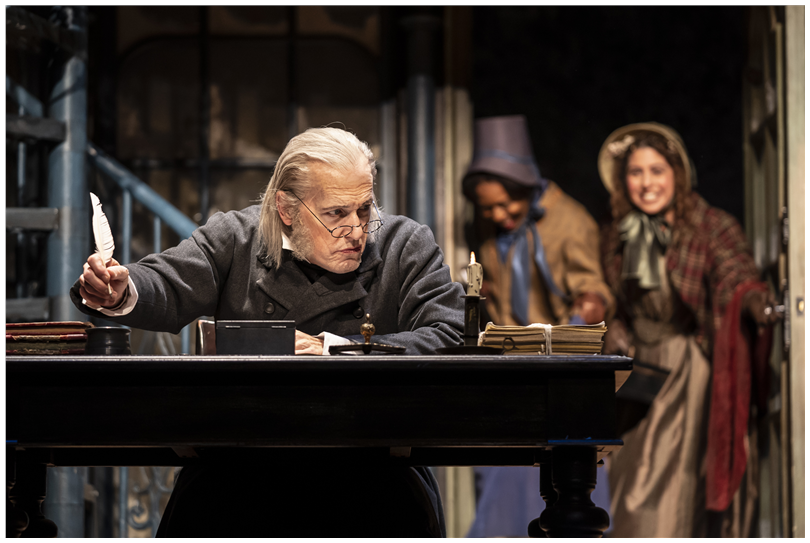 aloud why a doornail would be the death standard for nails, because surely coffin nails would be a better choice, he admits that that’s how it is written.  Marley is still dead, and Ebenezer Scrooge (Larry Yando) still hates Christmas.

Happy people everywhere are getting on his last nerve.  His clerk, Bob Cratchit (Thomas J. Cox), tries to put extra coal on the fire.  How dare people interrupt his workday to ask for donations for the poor!  In another unwanted interruption, his niece Frida (Ali Burch), delivers a Christmas tree, a gift and an invitation to Christmas dinner.  Then, she really aggravates him by putting extra coal on the fire before laughing, shouting Merry Christmas, and whipping out the door.  The final aggravation, Cratchit asking for a holiday with pay on 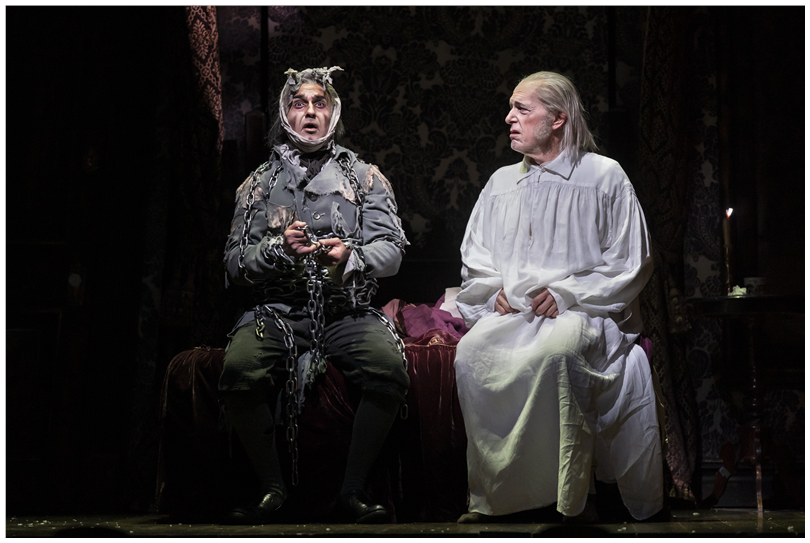 At home, Scrooge thinks he’s seeing things when his door knocker turns from a lion into a scary face with glowing eyes.  In his bedroom, he thinks he hears a noise, but shrugs it off and goes to bed.  Suddenly, there’s a very loud and annoying blast of sound accompanied by flashing lights.  His former partner, Jacob Marley (Kareen Bandealy), who’s been dead for seven years, appears in his bedroom.  Marley warns Scrooge about the chains awaiting 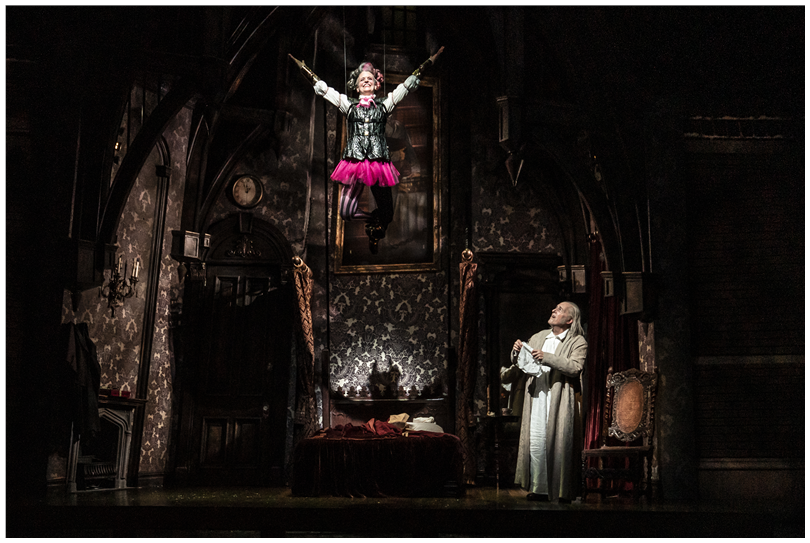 him after death and that he can expect three ghostly visits.

Scrooge shrugs off Marley’s warning and goes back to bed.  He’s just settled down when he’s rudely awakened by an annoyingly loud boom, and the exuberant Ghost of Christmas Past (Molly Brennan) – who looks a lot like a hyper-active version of Pink – flies into Scrooge’s bedroom.  She makes him overcome his fear and fly with her, then takes him back to a Christmas Eve during his lonely school days.  Young Ebenezer (Asher Alcantara) is sad but prepared to stay at the school over the holidays when his dear sister Fan (Hannah Starr) arrives to take him home – for good.

When Ebenezer (Christopher Sheard) is apprenticed to Fezziwig (Jonah D. Winston), he’s so serious about his work he refuses to be distracted, even by the Fezziwig Christmas celebration.  Mr. Fezziwig might be ready to party, but young Ebenezer works on his 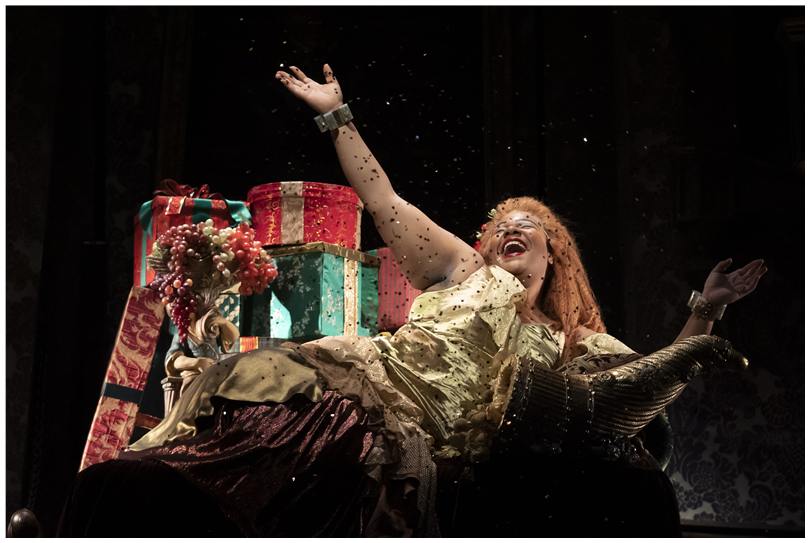 ledgers until Dick Wilkins (Breon Arzill) confiscates them.  Mrs. Fezziwig (Penelope Walker) makes him dance, but he doesn’t fully enjoy the evening until he meets Belle (Kristen Magee).  They fall in love, but ultimately, Scrooge was more interested in making money with Marley than he was in her love.

Scrooge has just settled down, when he’s awakened again.  This time, his bed is up by the ceiling and covered in wrapped packages.  Reclining in the midst of all those gifts is the Ghost of Christmas Present (Jasmine Bracey).  She takes great glee in scattering glitter everywhere as she takes Scrooge to see how other people spend Christmas. 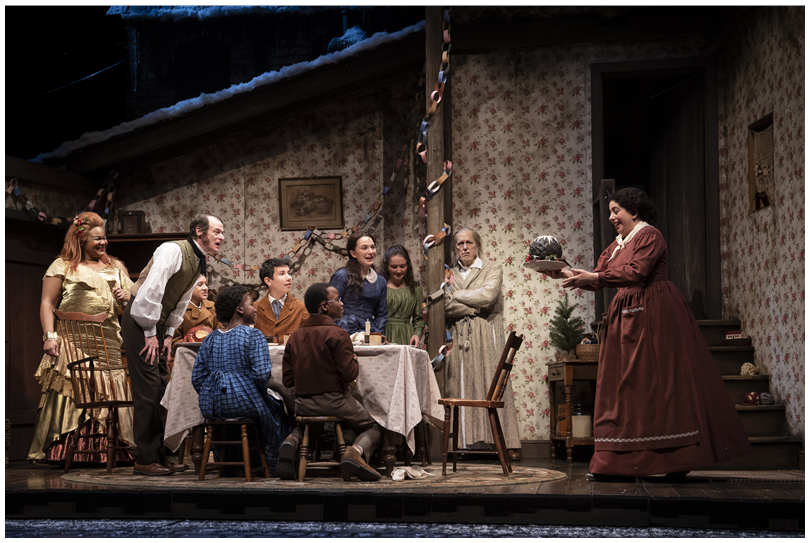 At the Cratchit home – but of course Scrooge doesn’t know it’s the Cratchit home – Mrs Cratchit (Susaan Jamshidi) is bustling around prepare for their Christmas feast with the help of Peter (Asher Alcantara), Belinda (Isabel Kaegi), Emily (Jillian-Giselle) and Nelson (Nelson Simmons).  Just then, the door opens and daughter Martha (Hannah Starr), who is apprenticed to a milliner, arrives home to join the fun.  When Bob and youngest child Tiny Tim (Paris Strickland), get home, they sit down to enjoy the very scrawny bird at dinner.  When Bob toasts Mr. Scrooge, Mrs. Cratchit has a hissy fit. 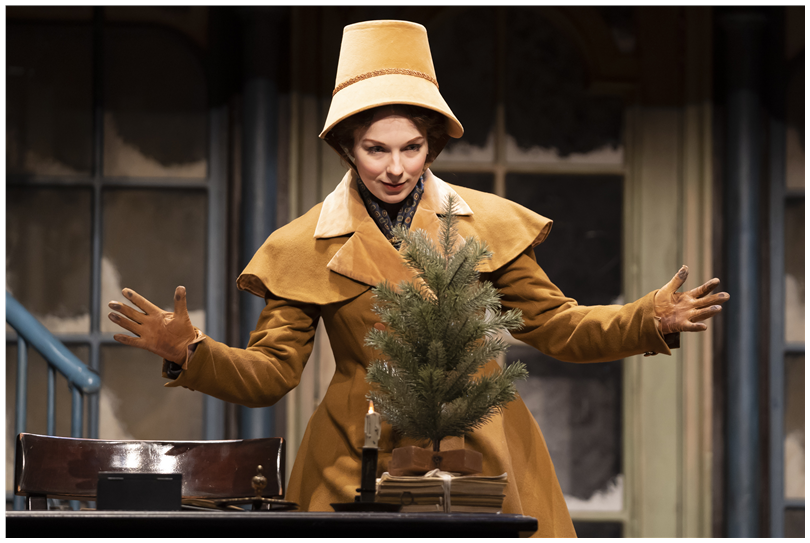 At niece Frida’s home, a game of charades keeps the guests occupied.  When her husband Abe (Christopher Sheard) and the other party make fun of her uncle, she defends him.

As time runs out, the Ghost of Christmas present is fading.  With a final warning to Scrooge, she lifts her cloak and reveals two small, starving children, Want (Jillian-Giselle) and Ignorance (Nelson Simmons).  Then the very creepy, extremely tall Ghost of Christmas Future (Breon Arzell), who never says a word but gets his message across very clearly, directs Scrooge to a death watch and a couple of funerals. 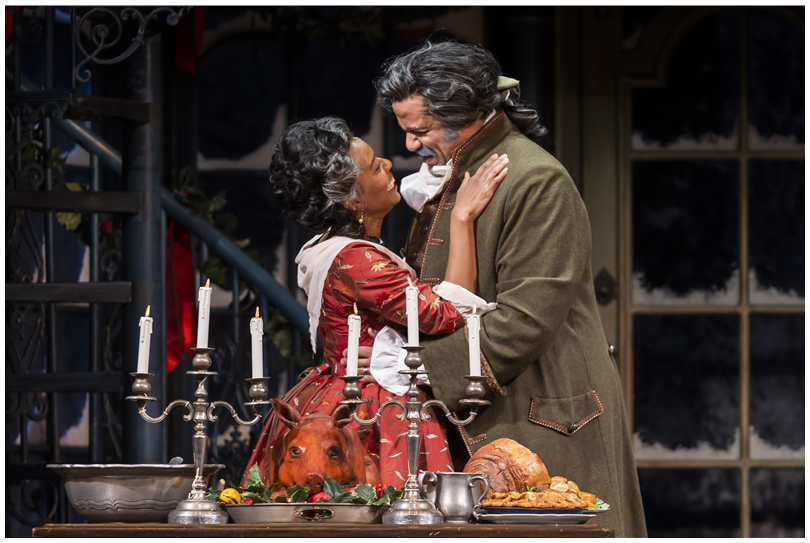 Kudos to the musicians, who stroll throughout the production are: Justin Amolsch (Horn in F), Alison Tatum (Violin), Maddi Ruhl (Flute/Pennywhistle/Piccolo) and Malcolm Ruhl (Concertina/Accordion/Guitar). 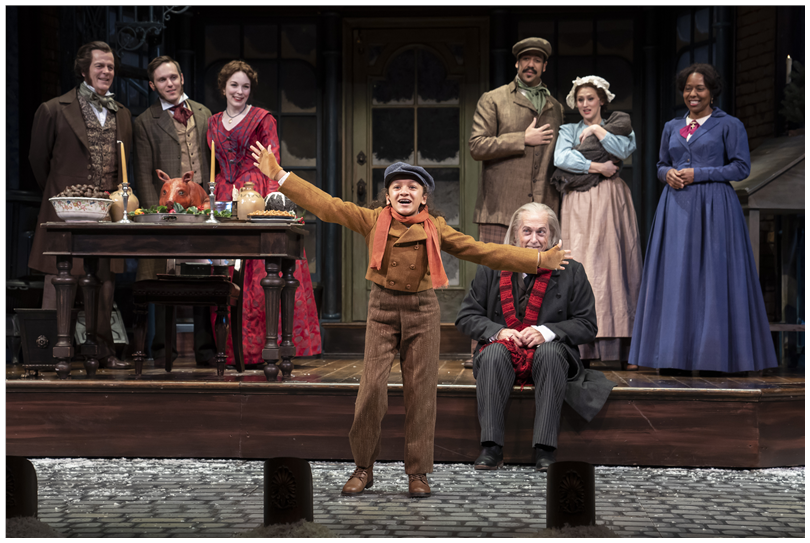 “A Christmas Carol” runs through December 29th in the Albert Theatre, Goodman Theatre, 170 N. Dearborn, Chicago.  Most reasonable parking option for the Goodman is the Government Center garage on Lake between LaSalle and Dearborn, online advance payment at www.interparkonline.com/goodmantheatre, $17.  Running time is 2 hours, 15 minutes with an intermission.