The Chicago Fire Soccer Club today announced its 2019 Club award winners, naming CJ Sapong the 2019 Most Valuable Player and Bastian Schweinsteiger the 2019 Defensive Player of the Year. Sapong also garnered 2019 Golden Boot honors after scoring a team-high 13 goals in his debut season with the Fire. 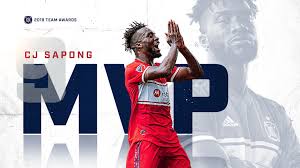 MOST VALUABLE PLAYER/GOLDEN BOOT: Sapong was acquired by the Fire on Feb. 23, 2019 and made an immediate impact, scoring in the team’s first two games of the season. The Manassas, Va., native led the team with 13 goals during the regular season, including three game-winners, and had two assists while creating 29 chances. He becomes the eighth player in Club history to lead the team in scoring during their first year with the Fire. Sapong also proved his mettle on the defensive end, leading the team with 225 duels won and 136 aerials won. Additionally, he made 32 appearances (29 starts) for the Fire in 2019, which ranks tied as the most on the team. 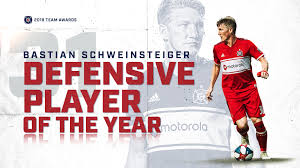 DEFENSIVE PLAYER OF THE YEAR: Schweinsteiger was named Chicago’s Defensive Player of the Year for a second consecutive season. In his final year with the Club, Schweinsteiger had a strong presence along the Fire’s backline with 124 duels and a team-high 35 tackles won. He also dished out three assists, created 18 chances and scored the game-winning goal in Chicago’s 3-2 win over the Montreal Impact on Aug. 10. In addition, the German’s 2,254 touches were ranked as the second-most on the team. Following the conclusion of the 2019 season, Schweinsteiger announced his retirement from professional soccer on Oct. 8, capping an illustrious 18-year playing career.

The Chicago Fire will return to Soldier Field for the 2020 Major League Soccer season. Fans can secure a seat for the Club’s 2020 MLS Home Opener on March 21 against Atlanta United FC, or any game of the regular season, with a refundable $20 ticket deposit. Season tickets will go on sale on Friday, Nov. 1. More information is available at www.chicago-fire.com/2020tickets.