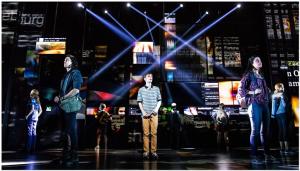 Since the events in “Dear Evan Hansen” are played out on social media, there are some questions we could/should ask.  Things go viral on social media all the time, but what does that mean exactly?  How does that happen?  Who feeds the frenzy?   What makes the social media trolls turn on people?  What happens to people’s lives when something goes viral?

With no social skills, Evan Hansen has no friends.  Evan’s mother, Heidi (Jessica Phillips), is bound and determined to ‘fix’ him, using therapy or whatever else it takes.  On his way out the door, she gives him a pen and suggests he ask his friends to sign his cast.  At school, Alana Beck (Phoebe Koyabe), a self-absorbed loner and Jared Kleinman (Jared Goldsmith), a sarcastic jerk – and the one guy who will talk to him because he’s a ‘family friend’ – refuse to sign his cast.

When Jared makes fun of the school’s ‘psycho’, Connor Murphy (Marrick Smith), Connor accuses Evan of laughing at him and knocks him down.  Connor’s sister, Zoe (Maggie McKenna), apologizes for her brother.  Since Evan secretly has a crush on Zoe, he’s incapable of talking to her.  At home that night, Evan’s mother insists he write an upbeat letter to himself.

The next day, Evan prints the letter on the school’s printer, but Connor finds it.  As he reads the beginning in which Evan describes himself as invisible, he says they might have something in common.  Then he reads a line about his sister and goes ballistic.  He keeps the letter and leaves.

Three days later, Evan is called into the principal’s office where Connor’s parents, Larry (Aaron Lazar) and Cynthia Murphy (Christiane Noll) ask him about his friendship with Connor.  Obviously Evan has no idea what they’re talking about until they show him his own letter and explain that they found it in Connor’s pocket after he committed suicide.  Evan just wants to make Mr. & Mrs. Murphy feel better, so he makes up a story about a beautiful day he spent with Connor at an apple orchard.

That one lie leads to another and another.  With technical assistance from Jared and social media push by Alana, Evan is transformed into Connor’s friend.  After Connor’s parents bring him into their family, he and Zoe start dating, and there’s a social media fund-raising campaign for the ‘Connor Project”.  Suddenly Evan fits in, and it’s all downhill from there.

Although this run of “Dear Evan Hansen” is sold out, don’t worry, the musical will be returning for twelve weeks this summer.  It’ll be running between July 7th and September 27th at the James M. Nederlander Theatre.  Tickets are on sale now.