Please note: The Den requires proof of vaccination for all guests, staff and performers and adheres to all CDC, state and local safety guidelines. Additionally, masking is required for all guests during performances. For the most current information on The Den’s COVID guidelines, visit thedentheatre.com/covid19-policy. 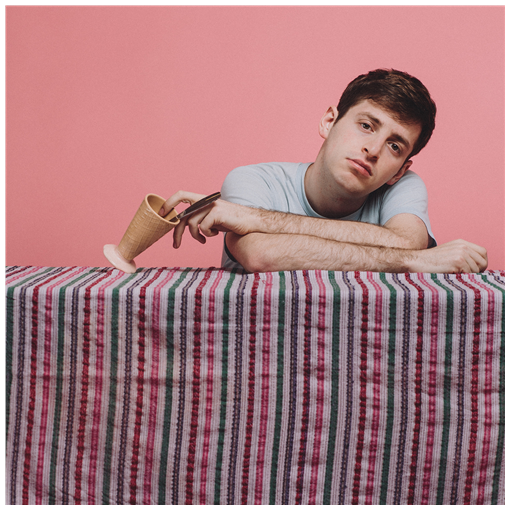 Alex Edelman’s first show, Millennial – about very traumatic stock photos and young people – won the Edinburgh Comedy Award for Best Newcomer, the first show by an American to do so since 1997. The follow-up, Everything Handed About You – about identity and the availability of outlets in airports – was even more acclaimed: selling out its entire Edinburgh run and garnering the second-best reviews of any comedy show at the Festival.

His third show, Just For Us has cemented his reputation as a writer-performer of impressive ambition and technical skill. In its premiere run at the Melbourne International Comedy Festival, it was nominated for a Barry Award for Best Show. In Edinburgh, it earned a Herald Angel Award, a nomination for Best Show and superlative praise that made it the best reviewed comedy show of the Festival.

Alex has opened for comedians like Eddie Izzard, Ricky Gervais, Patton Oswalt, Gary Gulman and a handful of musicians like Ryan Adams, Beck and San Fermin. He tours both nationally and internationally and is one of the founders of Jerusalem’s Off the Wall Comedy Club.

Alex also writes regularly for outlets like The Atlantic and The Believer, has written and produced documentaries for the U.S. State Department and ESPN’s “30 for 30” series, and spent more than a decade working as a speechwriter for the Los Angeles Dodgers and the Boston Red Sox.

Alex’s debut comedy album Until Now was released in 2020 and featured in Vanyaland.

Artistic Director Ryan Martin opened The Den in 2010 in the Wicker Park neighborhood with a single theatre space. Now celebrating its tenth year, The Den is a multi-level live entertainment venue that boasts five intimate and unique theaters ranging from 50 – 300 seats. The first floor houses The Den’s Haven Lounge – a full-service coffee shop and bar where neighbors, audiences and like-minded culture hounds gather to drink, eat, talk, read, watch, think, listen and live. Currently, The Den is home to five resident theatre companies including Broken Nose Theatre, ComedySportz Chicago, First Floor Theater, Haven and The New Coordinates (formerly The New Colony). Hundreds of other companies and artists from Chicago and beyond have called The Den home – from national names to local stars, The Den consistently plays host to a lineup of exciting and diverse talent. As a building created for interdisciplinary arts, The Den has accommodated a wide variety of programming, including plays, musicals, film screenings, live music, dance, improv and stand-up comedy, seminars and speaking engagements. For additional information, visit www.thedentheatre.com.