Full cast announced for holiday engagement of The Light in the Piazza starring Renée Fleming, Dec. 14-29 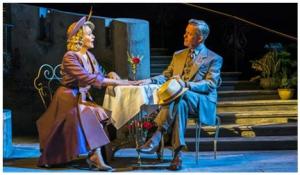 Fresh from critically acclaimed runs in LA and London, producers John Berry CBE and Anthony Lilley OBE for Scenario Two and Karl Sydow announced today the full Chicago cast for the limited holiday engagement of beloved Tony Award-winning musical The Light in the Piazza, for ten performances only, December 14-29, 2019, at Lyric Opera House (press opening Saturday, Dec. 14). The production is directed by multiple Olivier Award-winning director Daniel Evans and features the Lyric Opera Orchestra under the baton of Kimberly Grigsby, conductor of the original Broadway production.

The perfect feel-good alternative to traditional holiday fare, The Light in the Piazza’s rich, emotional score is unique amongst 21st-century Broadway musicals. Unapologetically lyrical, it was described upon its Broadway debut as having “the most intensely romantic score of any musical since West Side Story” (New York Times).

Tickets for the limited holiday engagement of The Light in the Piazza at Chicago’s Lyric Opera House (20 N. Wacker Drive), December 14-29, 2019, start at $49 and are on sale now. The Chicago engagement follows the production’s acclaimed runs at the LA Opera and London’s Royal Festival Hall. For more information or to purchase tickets, visit www.lightinthepiazzathemusical.com.

In The Light in the Piazza, Margaret Johnson (Renée Fleming) embarks on a fateful trip to Florence with her daughter Clara (Solea Pfeiffer) in the summer of 1953. A gust of wind whisks Clara’s hat into the hands of local dreamer Fabrizio Naccarelli (Rob Houchen) and it’s love at first sight—but Clara isn’t quite what she appears. Soon her mother is faced with a heart-wrenching decision, and they must all confront a secret that’s been kept in the shadows for far too long.

Based on the novel by Elizabeth Spencer, The Light in the Piazza book is by Craig Lucas, with music and lyrics by Adam Guettel. Scenario Two’s production of The Light in the Piazza is directed by Olivier Award winner and critically acclaimed musicals expert Daniel Evans and designed by Robert Jones, with costumes by Brigitte Reiffenstuel, movement by Lucy Hind, lighting by Mark Henderson and sound by Kai Harada.

Renée Fleming (Margaret Johnson) reprises her role in The Light in the Piazza after appearing in the production at LA Opera and London’s Royal Festival Hall. She is one of the most highly acclaimed singers of our time, performing on the stages of the world’s greatest opera houses, theaters, and concert halls. Winner of four Grammy® awards, and recipient of the US National Medal of Arts from President Obama, Renée has sung for momentous occasions from the Nobel Peace Prize ceremony to the Diamond Jubilee Concert for HM Queen Elizabeth II at Buckingham Palace. In 2014, Renée brought her voice to a vast new audience as the first classical artist ever to sing the National Anthem at the Super Bowl. Last spring, Renée appeared opposite Ben Whishaw in Norma Jean Baker of Troy to open The Shed at New York City’s Hudson Yards. She earned a Tony Award nomination for her performance in the 2018 Broadway production of Rodgers and Hammerstein’s Carousel. Her new album, Lieder: Brahms, Schumann, and Mahler, was released by Decca in June. She was heard on the soundtracks of the 2018 Best Picture Oscar winner The Shape of Water and Three Billboards Outside Ebbing, Missouri, and she provided Julianne Moore’s singing voice for the film Bel Canto. As Artistic Advisor to the John F. Kennedy Center for the Performing Arts, Renée spearheads a collaboration with the National Institutes of Health focused on music, health, and neuroscience. In 2010 she was named the first-ever creative consultant at Lyric Opera of Chicago. Among her many degrees is an Honorary Doctorate from Northwestern University, awarded in 2018, when she also delivered the commencement address. Other awards include the Fulbright Lifetime Achievement Medal, Germany’s Cross of the Order of Merit, and France’s Chevalier de la Légion d’Honneur.

Rob Houchen (Fabrizio Naccarelli) reprises his role in The Light in the Piazza after appearing in the production at LA Opera and London’s Royal Festival Hall. He trained at the Guildford School of Acting. Rob’s work in theater includes, most recent­ly, Marius in Les Misérables: The All-Star Staged Concert at the Gielgud Theatre in London’s West End. He has also appeared as Eugene in The Eugenius! (The Other Palace), Gibran in Broken Wings (Theatre Royal Haymarket), Les Misérables 30th anniversary gala (Japan), Fleet in Titanic (Charing Cross Theatre), Marius in Les Misérables (Queen’s Theatre), The 12 Tenors (World Wide Events), Godspell in Concert (Lyric), the title role in Candide in Concert (Cadogan Hall) and the title role in Peter Pan (Harlow Playhouse). Television credits include Tony in West Side Stories: The Making of a Classic. Listen to Rob’s own music on Spotify & iTunes.

Alex Jennings (Signor Naccarelli) reprises his role in The Light in the Piazza after appearing in the production at London’s Royal Festival Hall. Alex is a three-time Olivier Award winning TV, film and theatre actor who has worked extensively with the Royal Shakespeare Company, the National Theatre and throughout the West End. His three Olivier Awards include Best Comedy Performance for Too Clever by Half (Old Vic), Best Actor for Peer Gynt (Royal Shakespeare Company) and Best Actor in a Musical for My Fair Lady (Theatre Royal, Drury Lane). His screen appearances include playing Edward VIII in the critically acclaimed Netflix series The Crown, Alan Bennett in The Lady in the Van and Prince Charles in The Queen, alongside his many television roles which most recently include Unforgotten (ITV), A Very English Scandal (BBC), The Halcyon (Left Bank) and Victoria (Mammoth Screen).

Suzanne Kantorski (Franca Naccarelli), “an opera lover’s dream diva” (Addison Independent), is an award-winning performer known for her “lively and engaging” (New York Times) interpretations and “exquisite, striking vocals” (Fanfare Magazine) whose career spans multiple genres. This season, she has appeared as Nedda in Leoncavallo’s I Paglicci with Savannah Opera, Greensboro Opera, and Opera Orlando, in a production Opera Wire hailed as one of the “Top 5 Must-See Operas in North America.” As part of the Orlando production, she also sang the soprano role for their double bill with Stravinsky’s Pulcinella. Suzanne’s fall season continued as the title role of Tosca with Opera Company of Middlebury where she received critical acclaim. With a passion for working with living composers and on new music, Suzanne is also one of the members of the Montreal-based performance ensemble Quintus 4.

Marie McLaughlin (Signora Naccarelli) reprises her role in The Light in the Piazza after appearing in the production at LA Opera and London’s Royal Festival Hall. She is a distinguished soprano who has enjoyed more than three decades of performance at the highest international level. A wide repertoire of core roles took her around the world at an early age including to the Metropolitan Opera, Covent Garden, Opéra National de Paris, and the Salzburg and Glyndebourne Festivals. Her substantial discography includes many of those roles, such as Zerlina in Don Giovanni with Sir Neville Marriner for Philips, Despina in Così fan tutte with James Levine for DG, and Micaëla in Carmen and Violetta in La Traviata under Bernard Haitink. Key roles in today’s repertory include Marcellina in The Marriage of Figaro (Barcelona, Paris, Berlin, Salzburg, Met), Madam Larina in Eugene Onegin (Torino, Glyndebourne, Lille) and Despina in Così fan tutte (Scottish Opera, Spoleto).

Solea Pfeiffer (Clara Johnson) most recently starred as Penny Lane in the musical adaptation of the hit film Almost Famous at The Old Globe and will perform the role of Eva Peron in New York City Center’s upcoming revival of Evita. She starred in the critically acclaimed run of Encores! Off-Center’s production of Jason Robert Brown’s Songs for a New World. Prior to that, she starred as Eliza in the West Coast premiere of Hamilton. Solea’s first job out of college was Maria in the LA Philharmonic/Gustavo Dudamel Hollywood Bowl production of West Side Story. She later reprised the role in Steven Reineke’s National Symphony Orchestra production at the Kennedy Center. On television, Solea recurs on The Good Fight and appeared in one of the final episodes of Scandal.

Eric Sciotto (Giuseppe Naccarelli) has appeared in 12 Broadway shows: Annie Get Your Gun (Tommy Keeler), Elton John & Tim Rice's Aida, Sweet Smell of Success, 42nd Street, Sweet Charity, Cry-Baby, A Chorus Line, Pal Joey, Rock of Ages, Priscilla Queen of the Desert, The Mystery of Edwin Drood, and most recently, Something Rotten (Shakespeare). Eric also toured the nation as Tommy in Annie Get Your Gun, and as Paul in A Chorus Line. Eric's recent regional credits include Nice Work If You Can Get It, Footloose, Seven Brides for Seven Brothers, Pirates of Penzance and A Chorus Line. In addition to performing, Eric directs and choreographs musicals and plays; he most recently choreographed the west coast regional premiere of Something Rotten at Musical Theatre West. Prior to that, he choreographed Pippin and Mamma Mia in NoCal, and directed and choreographed The Full Monty at Theatre Workshop of Nantucket, the east coast high school premiere of Bright Star, Freaky Friday, The Drowsy Chaperone, You're a Good Man Charlie Brown, Xanadu, Bat Boy, Aida, and Into the Woods. He also directed Steel Magnolias, The Foreigner, Drop Dead and Footloose. This year, Eric joined the Musical Theatre Faculty of the University of Utah.

Malcolm Sinclair (Roy Johnson) reprises his role in The Light in the Piazza after appearing in the production at LA Opera and London’s Royal Festival Hall. Career highlights: Eisenhower in Pressure (Chichester/Royal Lyceum/Ambassadors; Olivier nomination), Major Miles Flack in Privates on Parade (Donmar Warehouse; Olivier nomination), Gavin Ryng-Maine in House/Garden (National Theatre; Clarence Derwent Award), Show Boat (New London), This House (Chichester Festival Theatre/Garrick) and extensive appearances in the West End, at the National Theatre and with the Royal Shakespeare Company. Film includes Casino Royale, V for Vendetta and The Man Who Knew Infinity. Television includes Midsomer Murders, A Touch of Frost, Silk, Foyle’s War and Pie in the Sky. Malcolm has been an actor/narrator with the Boston and London Symphony Orchestras, London Philharmonic and the Halle Orchestra.

The Light in the Piazza

Music and Lyrics by Adam Guettel

Scenario Two is a new UK company founded by John Berry CBE and Anthony Lilley OBE, which specializes in commercial theatrical production in London and internationally. It brings together the very best talent from the world of opera and musical theatre with top performers and creatives from other industries such as film, television and theatre. The company is creating exciting new productions of classic musicals and developing new commissions and thereby aims to attract both existing theatre-goers and new audiences in the West End and major theatres around the world. For more information visit www.scenario-two.com.