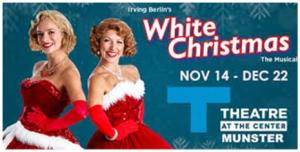 In case you’ve been living under a rock and don’t remember the story, it mostly takes place in 1954.  Don’t expect a clone of the movie, however.  The shorter stage version is more of an homage to the classic film. 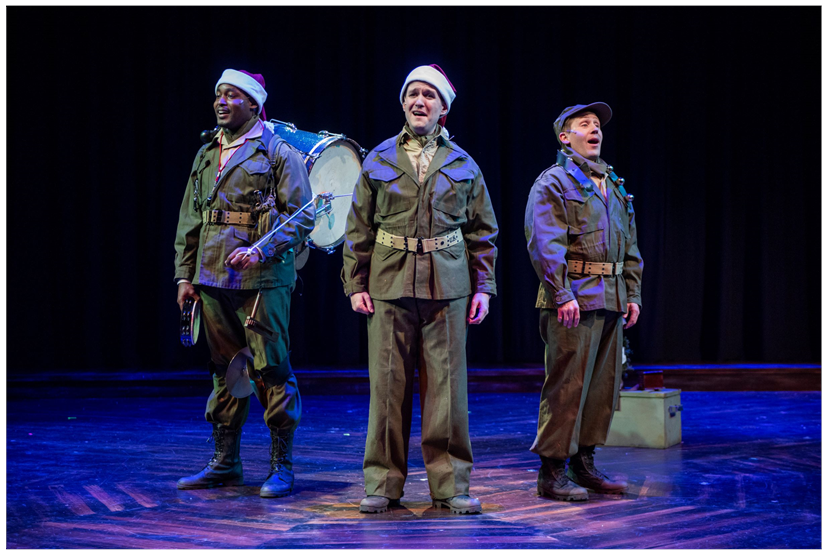 Jump into the future ten years; Wallace and Davis are now Broadway stars, while Sheldrake is a producer on the Ed Sullivan Show.  After an appearance on the Sullivan show, the guys are scheduled to leave for Miami to rehearse their new show.  Phil insists they visit a club to check out a sister act, as a possible act for their new review.  Phil says they’re the sisters of a guy from their unit, Freckle-Face Haynes, the dog-faced boy.  Impressed with the Haynes Sisters, the guys invite Betty (Erica Stephan) and Judy (Casiena Raether) to join them for a drink.

Although Phil hits it off with Judy, Betty and Bob have nothing to say to each other.  After the 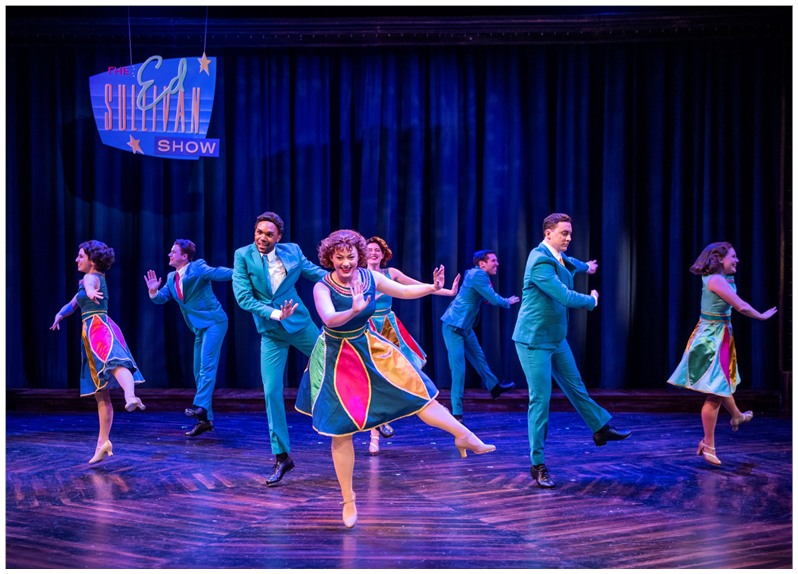 club, Phil tricks Bob onto a train bound for Vermont and coincidentally run into the sisters on the train.  All the sleds and skis on the train help Bob figure it out; the passengers singing about “Snow” infuriates him.

When they get to the inn in Vermont, there’s no snow.  In fact, all of the guests have cancelled.  When the Betty and Judy finally get to introduce themselves to the housekeeper/factotum, Martha Watson (Glory Kissel), she tells them there’s no one to entertain and she’s cancelling their gig.

Just then, General Waverly walks in with his granddaughter Susan (Raegan Smedley), and the guys snap to attention.  The General says he’s not a general anymore, he’s an innkeeper and they should call him Henry.  When the guys find out that the General is broke because there’s no snow – so no guests – they come up with a scheme to save the inn.  They’ll open their new revue in the barn on Christmas Eve filling the audience with their old 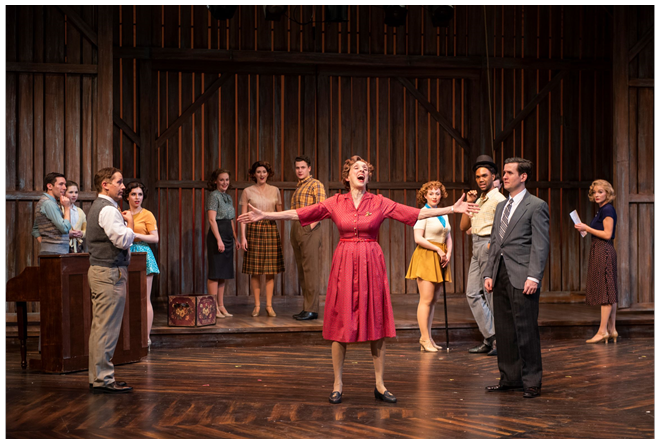 After everyone arrives, giggly dancers Rita (Ann Delaney) and Rhoda (Allyson Graves) run giggling to Phil which really annoys Judy.  When rehearsals start, Mike (Andrew MacNaughton), the Stage Manager, bewails the fact that he has just five days to put a show together – and he shares his office with a pig!  Ezekiel Foster (John Gurdian), who apparently comes with the barn, is always around except when he’s wanted.

Betty is still distrustful of Bob, but she warms up to him after she hears him sing “Count Your Blessings instead of Sheep” to Susan.  Of course when she thinks he’s scheming to sell the inn right out from under the General – thanks to Martha’s mistaken gossip about a phone call from Sheldrake – she freezes him out and takes a solo gig in New York.  Because they can’t find the girls, Bob and Phil take their place at rehearsals, rolling up their trousers, grabbing the fans and performing “Sisters”.  It’s a real hoot! 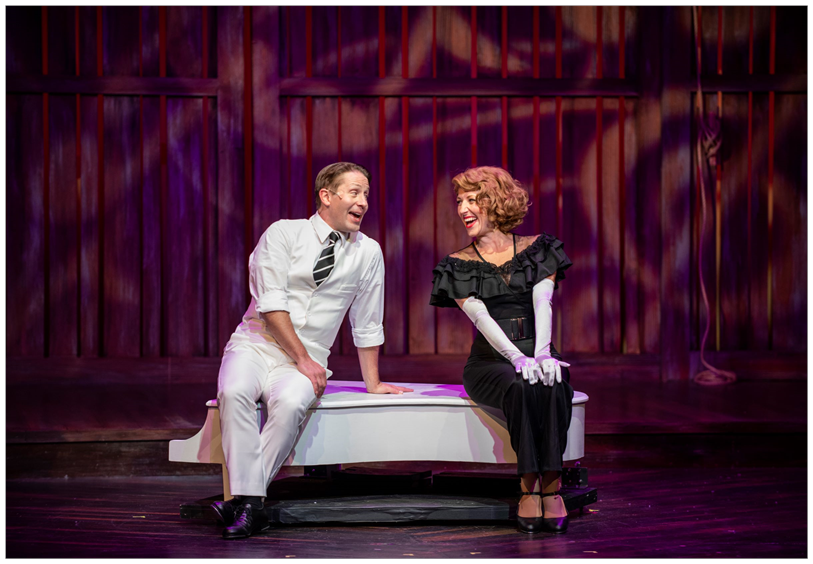 Martha Watson keeps dropping big hints, trying to get a part in the show, but the guys just don’t pick up on it until she belts out “Let Me Sing and I’m Happy”, after which Bob recognizes her voice.  The General is bewildered by the whole thing, but even Susan tries out for the show.

There are so may special songs in the show – songs like “Sisters”, “Snow”, “What Can You Do with a General?” and “Love and the Weather”.  Then there are the fabulous dance numbers, “Happy Holiday/Let Yourself Go”, “The Best Things Happen While You’re Dancing” and “Blue Skies”.  “I Love a Piano” is one of my absolute all-time favorite tap numbers.  Phil and Judy start the act around a white miniature grand piano.  He wears all white (for the white keys), except for a black and white striped tie, she wears all black (for the black keys), except for white elbow-length gloves.  When they’re joined by the dancers, also wearing white and black, the tap shoes fly.  Awesome!

Kudos to TATC Artistic Director Linda Fortunato.  This is a wonderful show with an amazingly talented cast.  Although there are just eight dancers – and everyone plays other parts – when they start dancing, they take over the stage.  They are: Ann Delaney, Allyson Graves, Matthew Huston, Andrew MacNaughton, Maggie Malaney, Victoria Newhuis, Lance Spencer and Matthew Weidenbener. 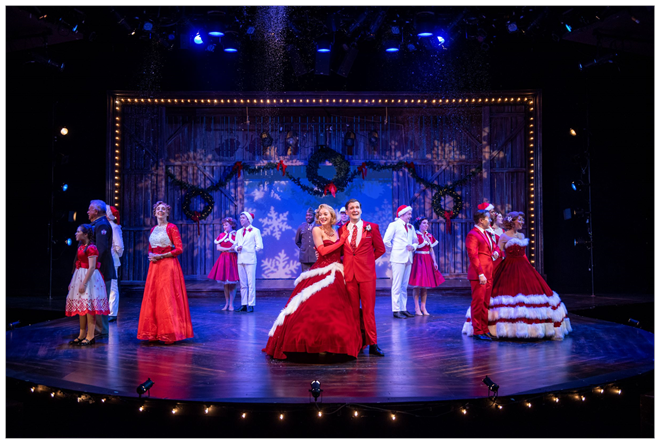 By the way, no one ever sees the musicians, so I must say kudos to Music Director William Underwood and the Orchestra, for a terrific job.  Musicians are: Randy Glancy, Keyboards; Linda Madonia, Keyboards; Nick Anderson, Percussion; Diane Hansen Woodwinds; and Jean Hoffman, Trumpet.