Gov. Eric Holcomb Presents Sagamore of the Wabash to Retiring Member of the Indiana Dept. of Correction 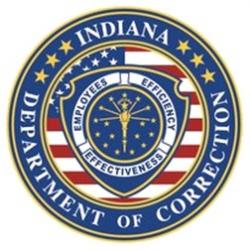 Being summoned to the Governor's Office isn't that unusual for Ed since he has been the person behind the scenes, much like the "Wizard of Oz", at every State of the State Address since Governor Daniel's administration.  Ed's responsibility was running the teleprompter for each annual address of the current sitting governor.  This was just one of Ed Lampa's duties as an Information Specialist with the IDOC. 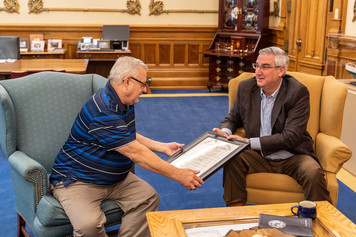 But this visit wasn't something Ed was prepared for; the presentation of a Sagamore of the Wabash from Gov. Holcomb.  After visiting with Ed and chatting about Ed's planned retirement on October 31st, Gov. Holcomb reached behind his chair and presented Ed the Sagamore.  Ed's two words of astonishment were "Oh my!" followed with some memorable keepsake pictures.  As Ed and Gov. Holcomb parted company Gov. Holcomb gave his retirement well wishes while still reminding Ed, "Now that you're Sagamore Ed, don't be surprised if I call to check in with you!"

Prior to joining the IDOC Ed was  producing and editing 16 mm films for Calumet College of St. Joseph in Whiting Indiana during the 1970’s, where he also instructed still photography and motion picture photography until 1981.  Ed also worked as a Biomedical Photographer in the early 1980's at the former Wishard Memorial Hospital in Marion County, Indiana.

Ed began his 33 years of distinguished and dedicated service to the Indiana Department of Correction in January of 1986.  He initially worked at the IDOC Correctional Training Institute (CTI) as an Information Specialist producing training videos for IDOC staff as well as for public use.  Over his three plus 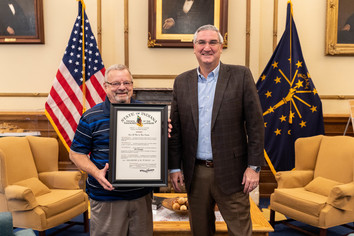 decades of service Ed saw the transition from VHS cameras and editing systems to S-VHS.  The progression continued into digital video production and editing which has advanced in capability with each passing year.

In his well earned retirement Ed said he and his wife plan to travel and enjoy each other's company.

A surprised Ed Lampa receives his Sagamore of the Wabash from Gov. Holcomb 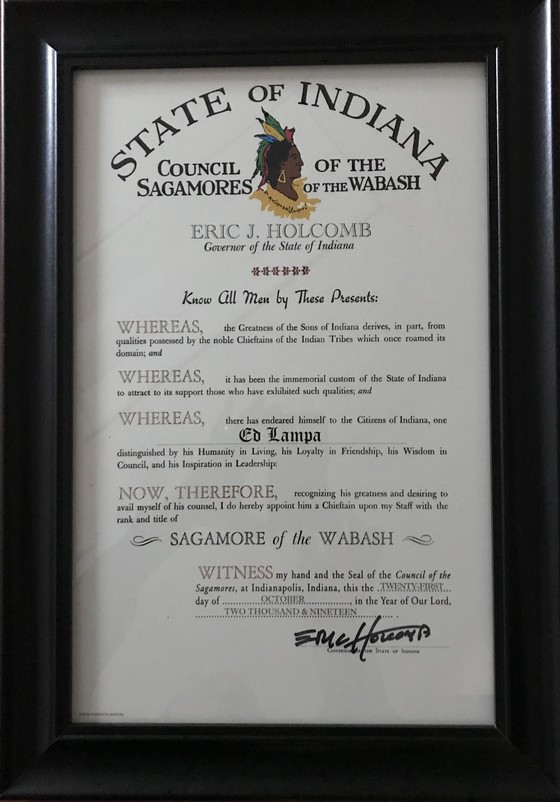 About The Sagamore of the Wabash:

The Sagamore of the Wabash award was created during the term of Governor
Ralph Gates, who served from 1945 to 1949. Governor Gates was to attend a tri-state meeting in Louisville with officials from the States of Ohio and Kentucky.  Aides to Gov. Gates learned the governor of Kentucky was preparing a Kentucky Colonel Certificate for Governor Gates and U.S. Senator Robert A. Taft, who
represented the State of Ohio. It was decided Indiana should have an appropriate award to present in return and thus The Sagamore of the Wabash award was born.

The term “sagamore” was used by the American Indian Tribes of the northeastern United States to describe a lesser chief or a great man among the tribe to whom the true chief would look for wisdom and advice.  Each governor since Gov. Gates has presented the certificate in their own special way. The award is highest honor bestowed by a sitting Governor of Indiana.  It is a personal tribute usually presented to persons who have rendered a distinguished service to the State or the sitting governor.

Those who have received a Sagamore include astronauts, presidents, ambassadors, artists, musicians, politicians, and citizens who have contributed greatly to our Hoosier heritage.  It should be noted Sagamores have been conferred upon both men and women with each governor reserving the right to personally select each recipient.