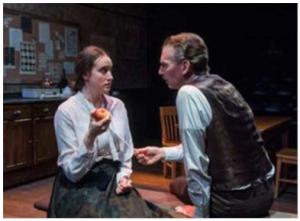 Chicago area theatergoers may remember that “Hannah and Martin” premiered at Timeline Theatre back in 2003 and it appears that the slight changes by Fodor and the exquisite staging by Louis Contey, on the very intimate stage of Theater Wit bring even more meaning to the love and hate relationship  of our main characters. How does one react to their former lover and teacher using their fame and extreme brilliance to work for Hitler and his Nazi party? In particular if you are a Jew, who is not being allowed to claim being German. The set (Nick Mozak) is multi functional and makes great use of a small area. The stage for this one is in the center of the theater, allowing spectators to be on two sides ( we can see reactions of our fellow audience members) bringing us closer to the action. 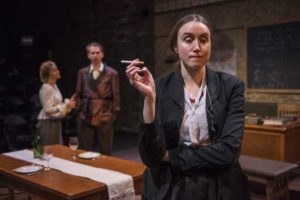 This is an intense two plus hours of theater that keeps you glued to your seat as Fodor explores Hannah’s question , “Is it a sin to take a hand outstretched for help or to refuse, if it comes from one who has sinned?”

There is no question that Martin is a sinner. As Hannah’s mentor and teacher, this married man with two children, took to her and as a romantic, convinced her that what they had , had been special. His wife, Elfride ( deftly handled by Cortney McKenna) a teacher herself overlooked his faults in favor of keeping their marriage strong ( for their sons). Hannah, knowing that she was somewhat “used” also knew that in spite of the ups and downs of the relationship, her teacher, Martin, had indeed taught her to think and therefore become who she was, so a great deal of the story is about her trying to get him re-instated by the teaching community to do lectures after all the truths of his association with Hitler come out.

The scene between Martin and Hannah near the end of the second act where he expresses why he met with Hitler and what he was expecting from the Nazi party is one of the most emotional scenes you will see on a stage. Both Grimm and Gorman were deeply involved with their characters and the emotions run very high. Those tears were as real as they might have been back in 1946. If you are a history buff, in particular World War II, I suggest you put this one on your must see list. 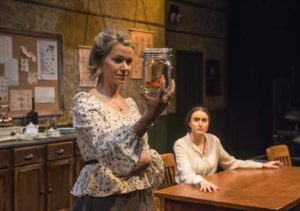 The ensemble is strong as well. It is always important to note that even the smallest of roles is there for a reason and one must always pay close attention to these characters so that one can see exactly how the pieces of the puzzle fit to make the story whole. Doug McDade, Daria Harper,  Drew Schad,Steve Peebles and Jazzma Pryor. The roles they play are integral to the wonderful story telling of this theatrical experience. The technical aspects of this production are solid from the costumes (Hailey Rakowiecki) , the lighting ( Simean Carpenter), the music and sound design ( Christopher Kriz) and props (Jonathan Berg-Einhorn). Beautifully done!

“Hannah and Martin” will continue at Theater Wit thru May 25th with performances as follows: 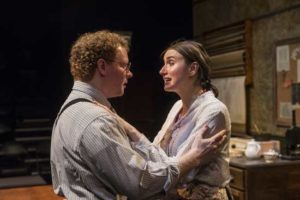 added Saturday matinée on May 25th at 3 p.m.

NO PERFORMANCE Friday, May 17th

Tickets are open seating and prices from $15- $39 ( $15 are student RUSH tickets, day of performance)