"The Island" - Review by Carol Moore 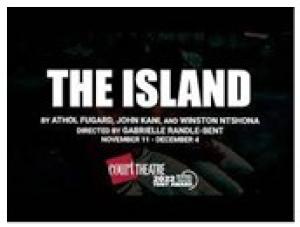 *** Recommended *** The first five or ten minutes of Court Theatre’s intense new production, The Island, are completely without dialogue.  Just two men walking, but how are they walking?  Although there were no actual chains on their hands or feet, they were definitely walking in chains.  That interval introduced the audience to some of the inhumane treatment – and sheer tedium – of life in prison.  Somehow, in spite of the horrific conditions, men are still capable of friendship – and theater.  3 Spotlights

The Island is South Africa’s notorious Robbins Island, where Nelson Mandela spent more than 20 years of his life.  Prisoners lives are ruled by a shrill whistle.  They spend their days digging in the quarry in the heat of the sun – meaningless work, since they’re just moving rocks from one spot to another.

Winston (Ronald L. Connor) and John (Kal A. Ealy), have drawn the ire of a sadistic guar.  When the whistle blows, they run to one side, pick up some gravel, run to the other side and drop it; the whistle blows and they do it again and again and again. This sequence presented a chance for audience members to grasp the futility of life in prison.  It was very effective but again, it dragged on and on and on.

In spite of everything, Winston and John are friends.  When one falls, the other helps him up.  After their work day ends, they secretly rehearse their own version of Antigone.  Winston refuses to play Antigone because he’s worried the other inmates will make fun of him, but John has already memorized the part of the king.  Their eventual performance is the defining moment of the play.

Note: Masks are encouraged but not required at this performance.

The Island runs through December 4th at The Court Theatre, 5535 S. Ellis Avenue. Chicago.  Parking is free in the adjacent garage, exit gate will open ½ hour after curtain.  Running time is 1 hour, 50 minutes, no intermission.