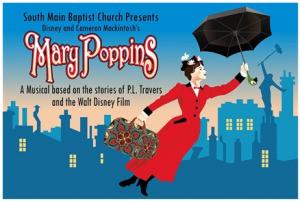 Jane (Grier Burke or Nicole Scimeca) and Michael Banks (Hunter DiMailig/Sebastian Merlo) have just driven another nanny to resign.  Their mother, Winifred (Alexis J. Roston), is worried about what their father will say. 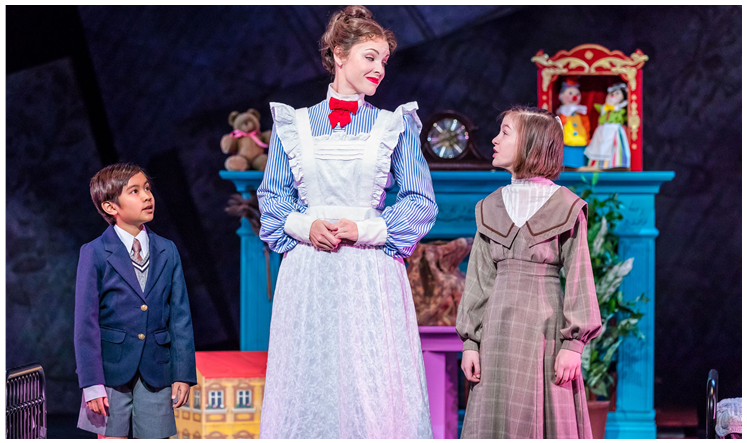 Meanwhile, Bert (James T. Lane), chimney sweep, artist and jack of all trades, quietly sings “Chim-Chim-Cher-ee”.  As he confides his concern about the goings-on in the house on Cherry Tree Lane, he greets Miss Lark (Iris Lieberman) and her dog, then bows to the ever prompt Admiral Boom (Bret Tuomi).

George Banks (Matt Crowle) orders Winifred to advertise for a new nanny.  Trying to be helpful, Jane and Michael write their own advertisement, but their father tore it up.  As if by magic, the children’s ad appears in the hands of Mary Poppins (Emilie Lynn). 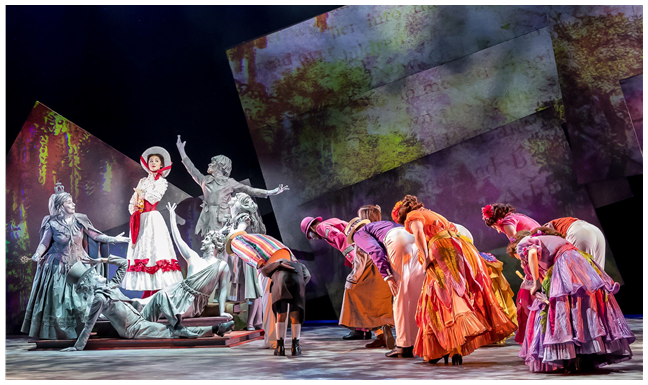 Up in the nursery, Mary Poppins amazes the children as she pulls things she needs – including a hat stand – out of her bag.  On their very first outing in the park, a statue of Neleus (Alejandro Fonseca) comes to life and talks to the children.  While Bert sings about a “Jolly Holiday” with Mary, other statues including Queen Victoria (Lieberman) come to life.

Back home, Winifred is bustling around trying to prepare for her party, but actually getting in the way of Mrs. Brill (Catherine Smitko) and Robertson Ay (Sawyer Smith), who have everything well in hand.  Upon their return home, Mary Poppins doses the children with “A 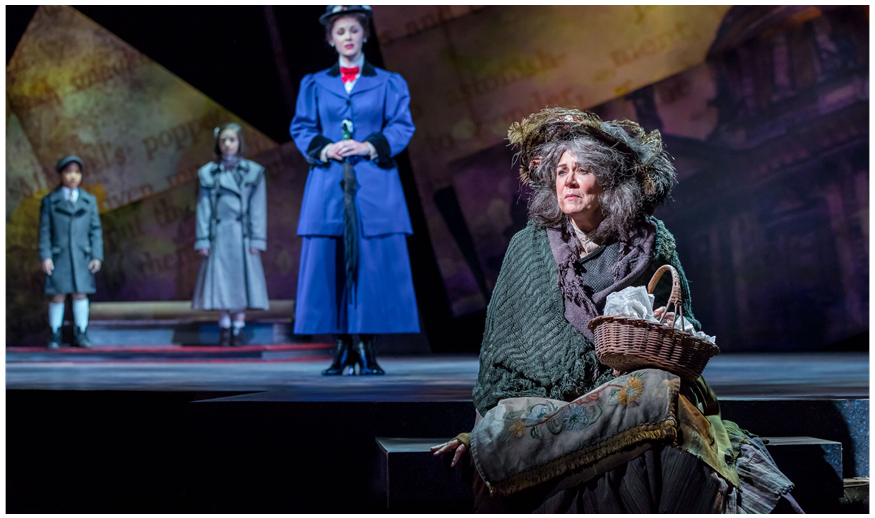 Spoonful of Sugar”.  Mrs. Brill is beside herself worrying about the cake when all the cupboards/counters fall apart – at least until Mary Poppins marches in and puts it all right.  Sadly, no one came to the party so Winifred felt like a failure.

The next morning, the household revolves around George, who preaches “Precision and Order”, before going off to work.  When Mary Poppins takes the children on an outing to their father’s bank, they see the Bird Woman (Catherine Smitko) outside selling crumbs to “Feed the Birds.” 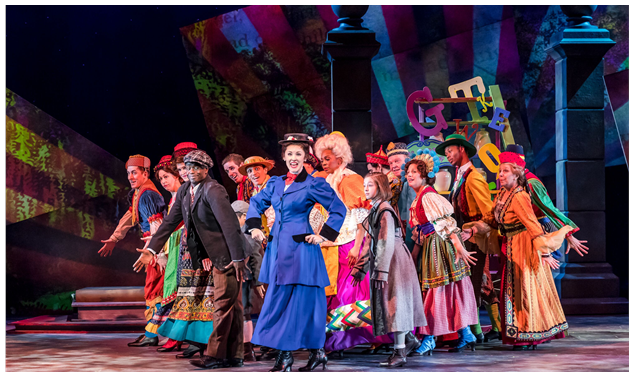 On another outing, Mary Poppins takes the children to Mrs. Corry’s (Harriet Nzinga Plumpp) fascinating shop to buy some letters.  Mary Poppins assembles some miscellaneous letters the children chose, using some more than once, adds a couple she chose, and comes up with a special new word.   “Supercalifragilisticexpialidocious” had the audience clapping and singing along.  The choreography was very cool, too.

Meanwhile, at the bank, George Banks decided to refuse to give a loan to Von Hussler (Nathan Mittleman), a man with a suspicious scheme, instead granting one to Mr. Northbrook (Brian M. Duncan), who wanted to build a factory.  Because the competition was making money from Von Hussler’s scheme, Banks was suspended. 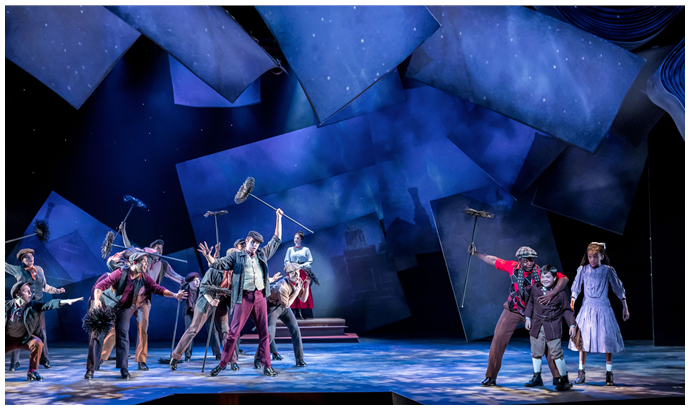 When he gets home, after George yells at everyone, the children run to the nursery and start fighting.  The wind changed direction and the children aren’t ready to learn so Mary Poppins abruptly left the Banks home.

Since George often cites the excellent methods his nanny used to raise him, Winifred tracks her down.  Miss Andrew (Holly Stauder), a thoroughly unpleasant sort, arrives with a caged lark and a lot of attitude.  She believes in dosing children with “Brimstone and Treacle”.  When George gets home from work and sees Miss Andrew, he runs screaming from the house.  The children run away, ending up in the park, where they fly a kite with Bert, who sings “Let’s Go Fly a Kite”.

After Mary Poppins returns and routs Miss Andrew, she leads the children up to the roofs where Bert and the chimney sweeps are singing “Chim-Chim-Cher-ee”, followed by “A Step in Time”, a spectacular tap dance number that brought down the house.