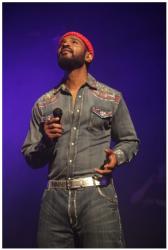 Jarran Muse, who played the young Marvin Gaye, was fabulous.  It’s uncanny how much his voice sounds like Marvin.  Chae Stephen played the older

Marvin.  Although his voice was a lot of Marvin’s, he wasn’t much of an actor.  Krystal Drake, who played Anna Gordy Gaye, had a beautiful voice but seemed to think attitude substituted for acting.  I can’t say enough about the fabulous Kourtney Lenton who played Marvin’s early singing partner, Tammi Terrell, who died at the age of 24.  Her voice is amazing.  Other speaking/singin parts belonged to Tony Grant (Harvey Fuqua), D’Extra Wiley (Jackie Wilson & Frankie Gaye) and Justin Reynolds (Smokey Robinson).

I think the easiest thing to do would be to bullet the things I didn’t like – since I already mentioned the music!

The final outrage, in my opinion, was the way they used “I Heard It through the Grapevine”, which was one of Marvin Gaye’s best songs.  The song started, people in the audience were rocking & singing along, and the song trailed off.  They used it as a segue, never even finishing the song!

“Pride and Joy” has closed after their five days at the Chicago Theatre and gone on to Houston.  If the show comes back, my advice, skip it!