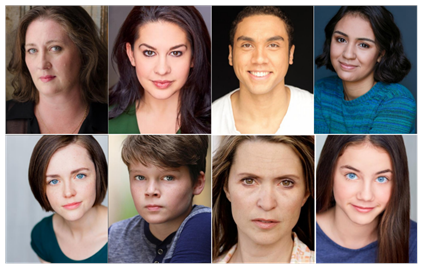 “Although the play firmly sits in the horror genre, it’s a heartfelt story about a foster family’s love for one another in the face of pain and grief,” notes director Shade Murray.

After a brutal car wreck in the mountains of Oregon, a young couple seeks shelter from a blizzard in a small cabin. But the cabin’s seemingly innocent inhabitants: four children and their minder, quickly start to expose the couple's secrets, unmake everything they know about themselves, and hurl them towards a potentially sinister destination. Grey House is a new horror play about the gravity of the past, and the cruel inevitability of its pull.

FLASHPASSes may be purchased from the Box Office at 1531 N. Wells Street, Monday through Friday from 12pm to 5pm, by telephone during office hours by dialing (312) 943-8722, or online at www.aredorchidtheatre.org. Individual tickets will go on sale at a later date.

With our 27th season of ambitious and powerful storytelling, we continue to champion A Red Orchid Theatre’s Red League, which is a gift $1k or more, and the Founders Circle, which is a gift of $5k or more annually for a three-year pledge. These donors represent a community of our most committed and impactful cultural investors. Every profound and shocking moment on our stage is made possible through their critical annual contributions. Their philanthropic leadership fosters the development of raw and relevant work, creates a platform for our talented ensemble to reach new audiences, and ensures that A Red Orchid Theatre remains a source for honest, compassionate, and aesthetically rigorous theatre.

About A Red Orchid

A Red Orchid Theatre has served as an artistic focal point in the heart of the Old Town community of Chicago since 1993 and was honored with a 2016 MacArthur Award for Creative and Effective Institutions. Over the past 25 years, its Resident Ensemble has welcomed into its fold an impressive array of award-winning theatre artists with the firm belief that live theatre is the greatest sustenance for the human spirit. A Red Orchid is well known and highly acclaimed for its fearless approach to performance and design in the service of unflinchingly intimate stories.