“We are thrilled to see Northwest Arkansas’s theatre recognized with this international distinction,” said Executive Director Martin Miller. “It is a credit to every community member who took part in this grassroots-driven process and to the amazing design and construction professionals who made this vision a reality.” 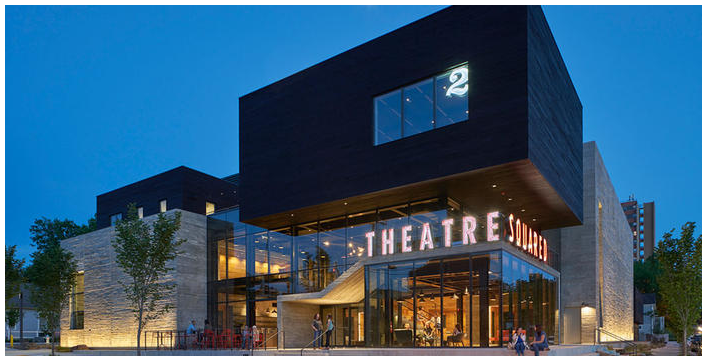 The path to a new, permanent home for TheatreSquared began with a vision drafted by a group of community members and artists in March 2015:

“We see TheatreSquared as its own center, a destination and a place of origin. We see a gathering place—a theatre commons—that is welcoming and fascinating, alive with activity. A place that invites, hints at the unusual, suggests, something significant will happen here. And, in the beating heart of the building are brilliant performances, intimate and unmediated, celebrating the joys and struggles of what it means to be human. Here on this corner, we see a permanent home for remarkable theatre, done well and with passion.”

Fueled by support from the Walton Family Foundation's Design Excellence program, TheatreSquared announced the selection of a world-class design team in November 2015.  A close collaboration between London-based theatre planners Charcoalblue and New York-based Marvel Architects — TheatreSquared’s new home came with the expertise that built theatres for the Royal Shakespeare Company, London’s National Theatre,  St. Ann’s Warehouse, and Chicago Shakespeare Theater, among many others. Thanks to a 100-year lease approved in 2016 by the Fayetteville City Council, the theatre is a vibrant artistic campus, located steps from dozens of restaurants and bars, blocks from the University of Arkansas campus, and across the street from a new 250-space parking garage.  The new building also features residences for internationally renowned theatre artists to work and live in downtown Fayetteville.

The building, its materials, and craftsmanship are an expression and celebration of Northwest Arkansas. The wood of the furniture, walls, and flooring was sourced from trees felled from the site, and local Ozark boulders were embedded into the landscaping. A limited material palette was used, giving priority to durability, flexibility, and the building's technical performance systems. Concrete provides a low-maintenance and durable finish intended to last for generations. The charring of the wood on the exterior creates a natural protective coating with an expected 50-year or longer lifetime. The materials work to create an efficient and sensible design where every space and material is used economically and purposefully. The 51,000 square foot complex is an anchor to Fayetteville’s emerging Cultural Arts Corridor, which broke ground in Fayetteville in September 2020 and will transform the use of the West Avenue into a place of public engagement and recreation with world-class award-winning design at the center.

TheatreSquared’s signature offering of bold new plays in an intimate setting has driven its growth to become the state’s largest theatre, offering more than 300 performances annually in two intimate spaces. The playwright-led company is one of mid-America’s leading laboratories for new work, having launched more than 60 new plays. Notable collaborators have included Bryna Turner, Anne García-Romero, Pulitzer Prize finalist Lisa D’Amour, Qui Nguyen, Mona Mansour, Tony Award nominee Lee Blessing, Amy Evans, and many others. TheatreSquared’s remarkable expansion—with a twentyfold increase in audience in just the past decade—parallels the emergence of its home region in the northwest corner of Arkansas as a booming population center and destination for American art.  Offering far-reaching access and education programs and an open-all-day gathering space, the Commons Bar/Café,  TheatreSquared remains rooted in its founding vision, that “theatre—done well and with passion—can transform lives and communities.”

TheatreSquared’s Our Next Stage Campaign raised special funds to support the design and construction of the new building as well as a new, permanent operation reserve. TheatreSquared is proud to recognize leadership support from the Walton Family Foundation, City of Fayetteville, Experience Fayetteville, the State of Arkansas, the Willard & Pat Walker Charitable Foundation, and Joel and Lynn Carver.

Special thanks also to Century Level Donors of $100,000 or more: Margaret & Richard Rutherford, Kirk Thompson and Brett Burch, Walmart Foundation, Carolyn and Nick Cole, Simmons Family Foundation, Candace and David Starling, Christina Moore and Paul Green, Bob and Becky Alexander, Tod Yeslow and Jackie Telfair, Barbara Shadden, Ted and Leslie Belden, James and Nancy Blair, Susan and Orville Hall, Ellis and Kay Melton, National Endowment For The Arts, Jenifer S. Tucker, John and Kitten Weiss, and the Bodenhamer Foundation… as well as to every generous donor who have helped bring the Campaign to 90% of its fundraising goal to date.

Major funding for the TheatreSquared Season 15 is provided by The Walton Family Foundation, Inc.; the Walmart Foundation; and by the Arkansas Arts Council, an agency of the Department of Arkansas Heritage and the National Endowment for the Arts. Marketing support for TheatreSquared Season 15 is provided by Experience Fayetteville, the Northwest Arkansas Democrat-Gazette, Fayetteville Flyer, CitiScapes, KUAF, MailCo USA and Univision.