"The Times Are Racing" - Review by Carol Moore 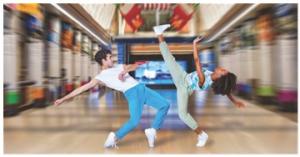 As Conductor Scott Speck and the Chicago Philharmonic Orchestra began Igor Stravinsky’s “Pulcinella Suite”, the curtain rose on “Commedia”, choreographed by Christopher Wheeldon “Commedia” pays tribute to the Italian commedia del’arte, particularly the character of the harlequin.  The dancers, 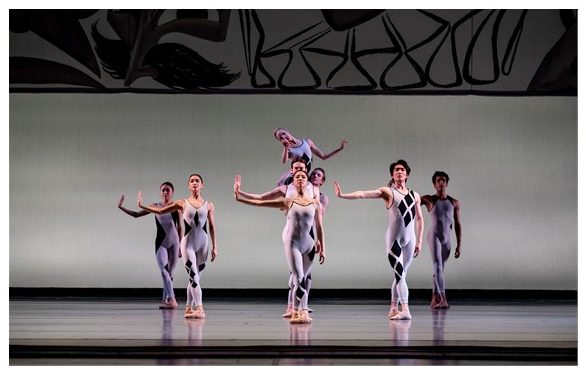 male and female, wore gray-toned unitards each with a slightly different harlequin design in black.  (Note: this ballet was dedicated to the life and legacy of Isabel Toledo, whose costume designs are an integral part of storytelling.) 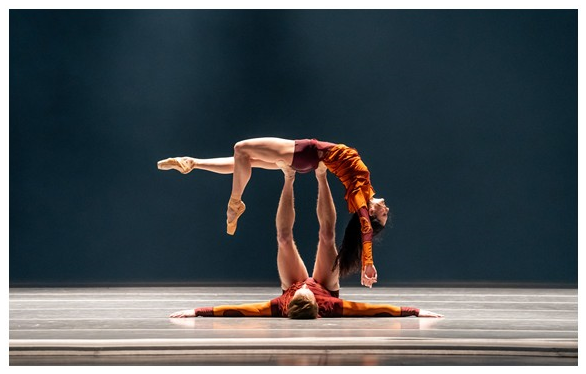 I loved “Mono Lisa”, a pas de deux choreographed by Itzik Galili to music composed by Itzik Galili and Thomas Hope.  Wearing textured burgundy tops and tank style shorts, Amanda Assucena and Alberto Velasquez showed their athletic and acrobatic strength as they danced to the staccato sounds of a typewriter.  Victoria Haiani and Stefan Goncalvez appear in the opening night photos.

Stephanie Martinez, choreographer of “Bliss” was a winner of the Joffrey’s Winning Works Choreographic Competition in 2015.  She was invited to create “Bliss” for the company as a part of a 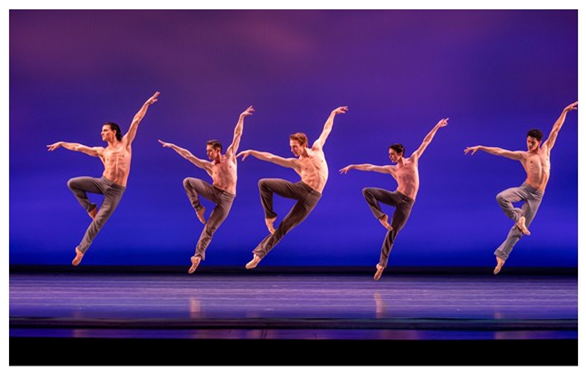 Stravinsky evening with the Chicago Symphony Orchestra.  “Bliss” is an opportunity for six of the company’s shirtless male dancers to shine.  By the way, ladies, you don’t need to go to the beach to see eight-pack abs!   Their gray pants are a perfect foil for the orange and turquoise blue costumes the two women are wearing. 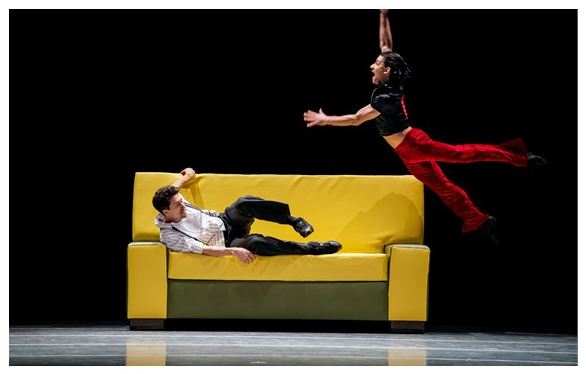 “The Sofa” is another piece choreographed by Itzak Galili to “Nobody” written and performed by Thomas Waits.  It is totally unlike anything I’ve ever seen before.  The curtain goes up to reveal a bright yellow sofa.  Sitting on the sofa are a man and a woman.  He shows his interest in her by putting his arm around her.  She shows her disinterest by belting him with her arm.  Attraction – reaction means they take turns throwing each other down on the sofa, bouncing, and/or rolling out of the way.  Eventually they turn the sofa over.  When it turns back again, the man is still there, but he’s joined by another much younger man, who demonstrates his attraction as they repeat everything.

Opening night Temur Suluashvili, Anna Gerberich and Fernando Duarte are on the sofa.  At my 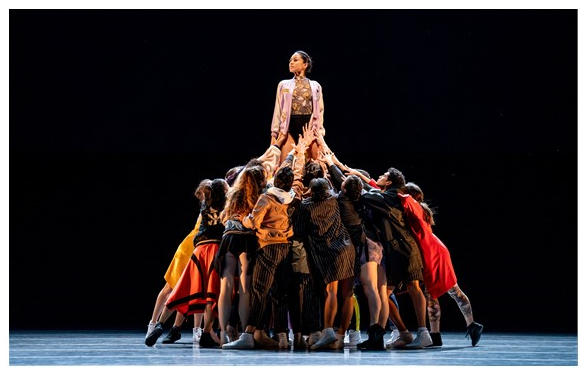 performance, it was Dylan Gutierrez, Christine Rocas and Evan Boersma.

“The Times Are Racing”, the ‘sneakers’ ballet, choreographed by Justin Peck to original Beatles compositions, is very physical, very exuberant, and yet very intimate.  The dancers, wearing brightly colored workout clothes and sneakers, move together into close formations, actually lifting one dancer over their heads.  Graceful, beautiful, flawless technique – these are all concepts I’ve used to describe the Joffrey Ballet. Strength, on the other hand, isn’t an adjective I can remember using in the past. I 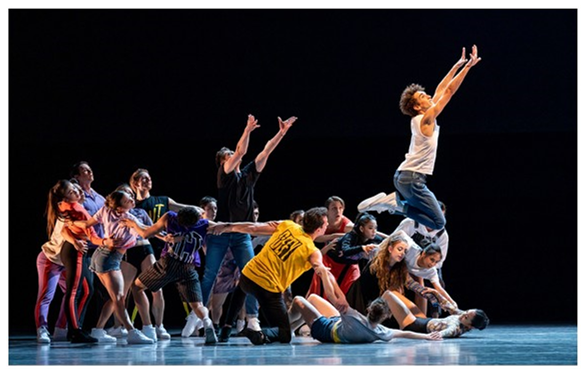 think strength is the underlying unifier in “The Times Are Racing”. 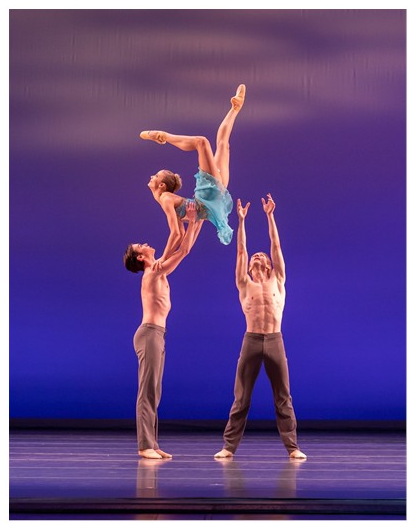 Some important notes:
• A BIG thank you to the Joffrey organization and their PR reps, the Silverman Group for switching my tickets at the last minute. There was this snowstorm on my original date …
• Different members of the Joffrey company are featured on different days during the run of “Modern Masters”, therefore the featured dancers I mention might not be the same as those mentioned in another review/article.
• Northwest Indiana note: Evan Boersma, who joined the Company just a couple of years ago, is making his mom, Kelly Boersma, the principal of Frank H. Hammond School in Munster, very proud!  He’s featured in the photo of “Bliss” I’ve posted with this review – and he was one of the three dancers cast in “The Sofa”.

“The Times Are Racing” runs through February 23rd at the at the Auditorium Theatre of Roosevelt University, 50 E. Congress Parkway, Chicago. Remaining performances are Saturday, February 22nd at 2:00 pm and 7:30 pm, Sunday, February 23rd at 2:00 pm. Tickets start at $35. The best parking option I’ve found is Loop Auto Parks, 524 S Wabash (under the El) at $20; $16 with $4 coupon available at www.auditoriumtheatre.org/plan-your-visit/parking-and-directions/.  FYI (312) 386-8905 or www.joffrey.org.