"The Wizard of Oz" - Review by Carol Moore 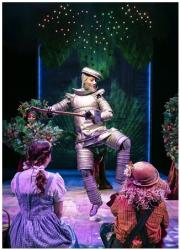 Highly Recommended **** “The Wizard of Oz” Chicago Shakespeare Theatre’s summer family show is bright, colorful and fun!  Kids of all ages will love it!   It’s not too long, just 75 minutes, but everything from the original is included.  The set is simple, the costumes are colorful, the music is lively, and Toto is a real dog!  Everyone will cheer for Dorothy as she outsmarts the Wicked Witch of the West, played by twelve-time Jeff Award winner, Hollis Resnik.  4 Spotlights 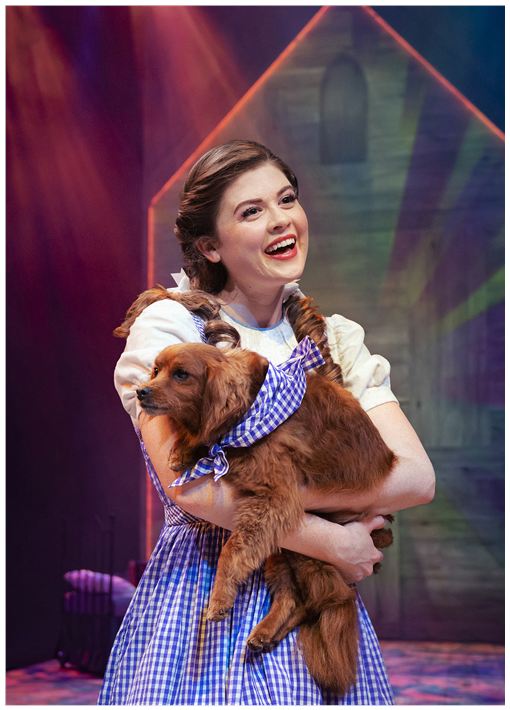 Dorothy (Leryn Turlington) and her dog, Toto (Derby), have managed to offend the meanest woman in town, Almira Gulch (Resnik).  When she tries to tell Auntie Em (Emily Rohm) and Uncle Henry (Jared D.M. Grant) about it, they’re too busy to listen.     When they allow Miss Gulch to take Toto, but he escapes.  Dorothy, hiding in her room, sings Over the Rainbow, then throws a few things in a basket, grabs Toto and runs away.

Not too far from home, she meets up with the proprietor of a medicine show, Professor Marvel (William Dick), who invites her to have a seat.  When she sees a tornado, she runs for home but can’t find anyone because they’ve all taken shelter in the storm cellar.  Dorothy hides in her bed while a tornado produced by the citizens of Kansas spinning and dancing around a small model house, swirls around her.

When she opens her eyes, she’s in a strange and beautiful place.  When she’s convinced that Dorothy isn’t going to hurt anyone – and clearly she already has, since there’s a pair of legs sticking out from under her house – Glinda, the good Witch of the North (Rohm), explains that she’s in Munchkinland and invites the Munchkins to come out of hiding.

Glinda points out the legs under the house, which just happen to belong to the Wicked Witch of the East, the Munchkins begin to dance and sing Ding Dong! The Witch is Dead.  The party is interrupted by the Wicked Witch of the West (Resnik), who demands her sister’s ruby slippers.  When she hears that Glinda has already given the slippers to Dorothy, she cackles a warning.

Dorothy wants to find her way back to Kansas, so Glinda recommends that she follow the Yellow Brick Road to the Emerald City.  Along the way, Dorothy meets a kind Scarecrow (Marya Grandy) who wants a brain, a Tinman (Joseph Anthony Byrd) who is looking for a heart, and a Cowardly Lion (Jose Antonio Garcia) who is seeking courage.  They join Dorothy on the Yellow Brick Road hoping the Wizard will help them too.

When they finally reach Oz, the Wizard (Dick) promises to help them, if they bring back the Wicked Witch’s broom.  Since the Witch isn’t going to just give up her broom, she set traps along the way.  When she captures Dorothy and Toto, Scarecrow, Tinman and Lion come to the rescue, Dorothy throws a pail of water at the Witch.  Broom in hand,  they go off to see the Wizard again 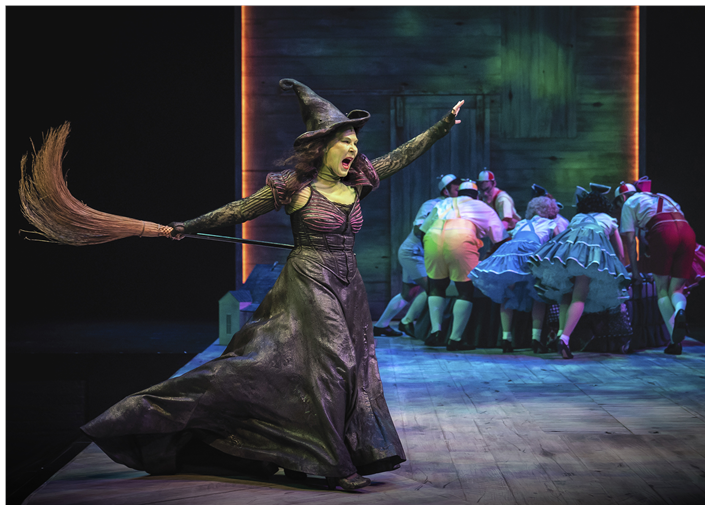 The music is terrific, with songs like Over the Rainbow, Ding Dong! The Witch Is Dead, Follow the Yellow Brick Road, If I Only Had A Brain, We’re Off to See the Wizard”, and more.

“The Wizard of Oz” runs through August 25th in the Courtyard Theatre, Chicago Shakespeare Theatre on Navy Pier.  Parking is available at a 40% discount in the Navy Pier Garages with validation from CST.

Running time is 75 minutes, no intermission.  Performances are Wednesdays at 11:00 am; Thursday through Sunday at 11:00 and 2:00 pm.  Accessible performances: ASL Duo-interpretation – Saturday, August 24th at 11:00 am.  Audio-description – Sunday, August 18th with optional touch tour at 11:am.